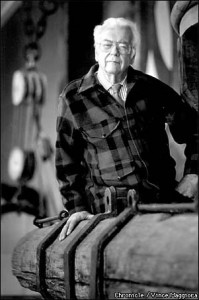 The following article was first published in the New York Times, September 15, 1996.

Karl Crouch Kortum, the founder of what is now the San Francisco Maritime National Historical Park, died on Thursday in San Francisco at the age of 79. The cause was congestive heart failure.

Mr. Kortum’s love of ships and the sea dated from his 1941 passage in the barque Kaiulani from Gray’s Harbor, Wash., east around both Cape Horn and the Cape of Good Hope to Durban, South Africa, and Hobart, Tasmania. The voyage, on which Mr. Kortum served as acting mate, was the last for an American merchant ship under sail.

Mr. Kortum served on steamships in the merchant marine in World War II, in the personnel office of the United States Army’s small ships division and as mate on a variety of steamships until 1946.

But Mr. Kortum’s heart remained in the golden age of sail, and he devoted himself after the war to the creation of a museum in San Francisco dedicated to the maritime history of the Pacific. Established in 1950 at Aquatic Park, the San Francisco Maritime Museum transformed the city’s north waterfront.

The museum featured intricate wooden models of historic ships, in many cases built by sailors who knew them. But it was the 1953 acquisition and restoration of the steel-hulled square-rigger Balclutha that gave the museum landmark status. Over the years, the Balclutha was joined by a number of historic craft, both sail and steam, at San Francisco’s Hyde Street pier.

Mr. Kortum also helped to restore the Falls of Clyde in Honolulu; the Great Britain in Bristol, England; the Wavertree in New York; the Elissa in Galveston, Tex., and the Moshulu in Philadelphia. He helped found maritime museums around the world, including the South Street Seaport Museum in New York City, and he helped found the World Ship Trust and the National Maritime Historical Society.

In presenting Mr. Kortum the American Ship Trust Award in 1992, Walter Cronkite said: ”By sheer determination, backed by what I have to call a kind of intellectual brilliance, he has made the case for historic ships clear to all of us, and he has made it stick.”

Although the great sailing ships of the 19th century were his first love, Mr. Kortum was not dogmatic. When the clipper ship Flying Cloud‘s 1854 New York-to-San Francisco record finally fell to a modern sailing yacht, Thursday’s Child, in 1989, Mr. Kortum was quick to point out that the clippers themselves had been the products of high technology in their time. He was often at odds with his superiors, and he was once charged with insubordination by the National Park Service, which took over the Maritime Museum in 1978. Mr. Kortum resigned last year.

Mr. Kortum was born in San Bernardino, Calif., and grew up on a poultry ranch in Petaluma, about 50 miles north of San Francisco.