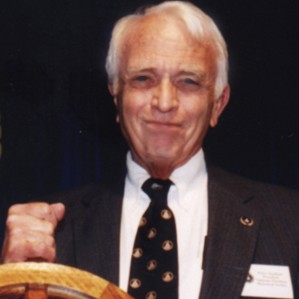 Peter Stanford was the founding president of South Street Seaport Museum in New York and the second president of the National Maritime Historical Society, after founding president Alan Hutchison. Under his leadership, the Society began publishing the distinguished quarterly magazine Sea History. Other NMHS publications included such works as the International Register of Historic Ships, The Peking Battles Cape Horn, and The Skipper and the Eagle.

Mr. Stanford co-founded and supervised both OpSail 1976 for the nation’s bicentennial and the Statue of Liberty Parade of Sail in 1986 and was active in several maritime organizations, including the Working Harbor Committee of New York.

A native of Brooklyn and a naval veteran of World War II, Mr. Stanford was the author of hundreds of magazine articles and a number of museum books. His last book was A Dream of Tall Ships—How New Yorkers came together to save the city’s sailing-ship waterfront (Sea History Press, 2013). He earned a Bachelor of Arts degree from Harvard in 1949 and a Masters degree from King’s College, Cambridge, England, in 1951. He was also the recipient of an Honorary Doctor of Letters from the State University of New York Maritime College at Fort Schuyler.