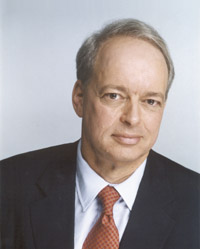 Clay Maitland was born in London in 1942 and has worked in the shipping industry since graduation from law school in 1968. The years since then have been a time of great changes in the field. He is managing partner of International Registries, Inc., which administers the Marshall Islands Ship Registry, approximately the second largest registry in the world.

Clay Maitland is an active member of the maritime community, and among his many affiliations he is on the boards of the Maritime Industry Museum at Fort Schuyler, the American Merchant Marine Museum at Kings Point, Seamen’s Church Institute and its Center for Seafarers’ Rights, and the Executive Committee of the Coast Guard Foundation. He plays an active role with the United Nations maritime sector.

Among his professional affiliations he is a former Chair of the Admiralty Committee of the New York City Bar Association and the Committee on Intergovernmental Organizations of the Maritime Law Association of the United States. Mr. Maitland has been the recipient of numerous awards for his work in the maritime community.

Clay Maitland is NMHS chairman emeritus. He developed the Society’s strategic plans that included a strong fiscal foundation. He has an intense interest in and great knowledge of maritime history.