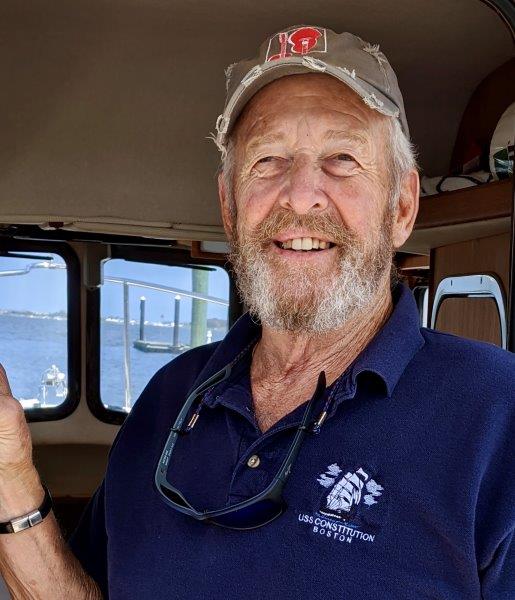 Award winning author William H. White has been an historian specializing in the maritime heritage and American involvement in the Age of Sail for most of his adult life. A life-long sailor himself, he has sailed under square rig, giving him a knowledgeable and first hand insight to the complex workings of the vessels about which he wrote. He served six years as an officer in the United States Navy in the ’60’s and was actively involved in naval operations for three years in Vietnam.

In addition to serving as a Life Trustee of the USS Constitution Museum in Boston, and former Trustee of LYNX Educational Foundation, he is a Trustee and officer of the National Maritime Historical Society and heavily involved in its operations. Early in 2012 White was elected to the Board of Trustees of Operation Sail, Inc., (now defunct) and he also served on the board of Tall Ships America for several years

His War of 1812 Trilogy (A Press of Canvas, A Fine Tops’l Breeze, and The Evening Gun) was well-received and he has lectured frequently on the War of 1812 and the Barbary Wars (1803-5). The Greater the Honor, released in April 2003, centers on the Barbary Wars and Stephen Decatur’s exploits in that theater.  In Pursuit of Glory, is the sequel to The Greater the Honor, and deals with the events leading up to the War of 1812.  When Fortune Frowns is the little-known story of Britain’s attempt to capture the mutineers from HMAV Bounty.

A recognized authority on the maritime aspects of the War of 1812, Mr. White was heavily involved with the U.S. Navy and Operation Sail in their bicentennial commemoration efforts beginning in the 2012 and running into 2015. His next release, “… our flag was still there” is not only a concise history of the War but a listing of events celebrating the bicentennial. He was commissioned by the U.S. Navy and the National Maritime Historical Society to write this guide to the War and its bicentennial.

Following the release of this non-fiction effort, White returned to historical fiction, once again focusing on a little-known incident in Royal Navy history in 1794. The so-called Wreck of the Ten Sail is well-known history in Grand Cayman where White had spent his winters for many years and thus seemed right to anchor a follow-on to Edward Ballantyne’s adventures. Gun Bay is the result and tells the story that culminates with 9 merchant ships and 1 Royal Navy frigate on the reef at East End, Grand Cayman.

Speaking venues have included the USS Constitution Museum, Boston, Peabody Essex Museum, Salem (MA), Museum of the Atlantic, Halifax (NS), Herreshoff Marine Museum, Bristol (RI), Calvert Maritime Museum, Solomons (MD), and India House, NYC, as well as many others. He has also been a guest lecturer at SUNY Maritime College, Fort Schuler NY. A member of the 1812 Consortium, Mr. White was one of the program speakers at the 2003 Fall War of 1812 Symposium in Baltimore, MD. He has authored, in addition to his novels, a variety of magazine articles on both historical and contemporary subjects. In 2007, he was honored by Sea History Magazine with the first Rodney Houghton Award for Excellence, given for the best feature length article of the year. His article detailed the cruise of HMS Pandora and the capture, trial, and execution of the Bounty mutineers.

Mr. White was honored in 2010 by the USS Constitution Museum in Boston with the Samuel Eliot Morison Award. The award is “the highest recognition by the Board of a person whose public service has enhanced the image of the USS Constitution and who reflects the best of Admiral Morison: artful scholarship, patriotic pride, and eclectic interest in the sea and things maritime and a desire to preserve the best of our past for future generations.”  He joins the ranks of past recipients including Walter Cronkite, Henry Cabot Lodge, Arleigh Burke, Patrick O’Brian, Nathaniel Philbrick, and Ira Dye.

He has appeared on the History Channel on “History or Hollywood” as well as participating as one of the narrators in a “docu-drama” on the Barbary Wars, and has been interviewed numerous times on radio on varying subjects centered on maritime history.

While officially retired from penning full length books, White continues to write the occasional magazine article and post a (more or less) weekly blog on a variety of historical and contemporary subjects of interest to the maritime world. Maritime Maunder began life six and one half years ago and today enjoys a readership of over 117,000 readers, worldwide.

His books are all available through his website, www.seafiction.net, NMHS Ship’s Store, and Amazon.com.