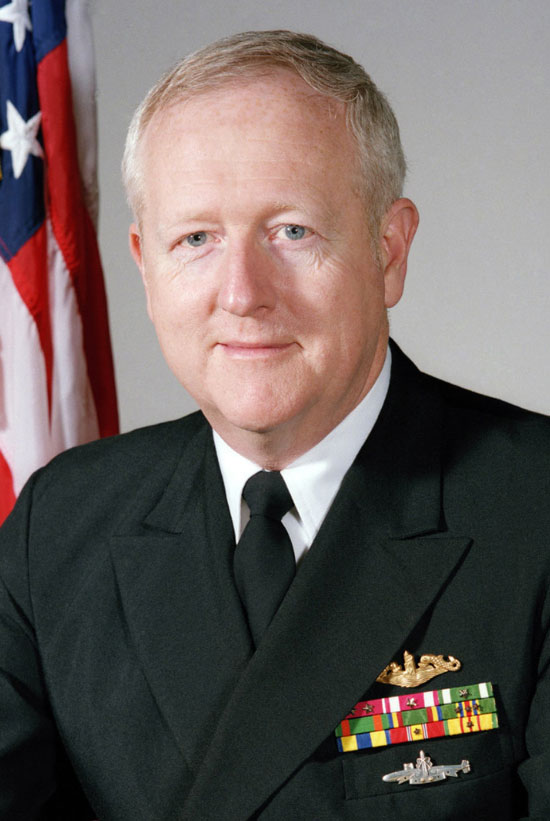 In 2012, ADM Bruce DeMars, USN (Ret.) was awarded with the NMHS Distinguished Service Award.  We recognized his many accomplishments in the evening’s awards dinner journal:

Born in Chicago, Illinois, Admiral Bruce DeMars graduated from the US Naval Academy in 1957. His early career included service on the attack transports USS Telfair and USS Okanogan and the diesel-electric submarine USS Capitaine. He then received nuclear power training, and served in the nuclear-powered submarines USS George Washington, USS Snook and USS Sturgeon, after which he was the commanding officer of USS Cavalla.

Admiral DeMars served as the Commander US Naval Forces Marianas and Commander in Chief Pacific Representative for Guam and the Trust Territory of the Pacific Islands. From 1983 to 1988 he was the Chief of Naval Operations’ principal assistant for submarine matters. Prior to his retirement he served for 8 years as Director, Naval Nuclear Propulsion; this program included some 176 reactor plants on over 150 ships and submarines, 8 land­ based research and training reactors, 8 nuclear-qualified shipyards, 2 Department of Energy laboratories and an extensive c01mnercial supplier base. He directed the transition of this enterprise to the post-Cold War period. When he retired in 1996, Admiral DeMars’s 44-year career was recognized with resolutions from both houses of Congress. Admiral DeMars’s decorations include two awards of the Distinguished Service Medal, and many other personal decorations and campaign and service medals.

In 2008, Admiral DeMars was elected chairman of the Naval Historical Foundation. Prior to assuming that role, he led his Naval Academy Class of 1957 in raising the funds to endow a new Distinguished Chair in Naval Heritage for the Academy’s History Department. Since becoming NHF chairman, he has been instrumental in extending the outreach and visibility of that 86-year-old nonprofit organization to navy leadership and veterans, corporate America, and the American public. Admiral DeMars believes in the power of partnerships to attain the common objective. Under his leadership, the NHF partnered with Historic Ships in Baltimore and teamed with a coalition of maritime heritage organizations including the National Maritime Historical Society and the Historic Naval Ship Association to host a most successful Ninth Maritime Heritage Conference at Baltimore’s Inner Harbor in September 2010. Subsequently, working with this coalition of maritime heritage advocacy groups, the NHF has taken a strong interest in the long-term preservation of USS Olympia, currently located at Penn’s Landing in Philadelphia. As noted in the pages of Sea History magazine and in an appeal letter sent by NMHS to its members, an online donation portal to support this historic ship’s preservation, www.preservationnation.org/olympia, is now being hosted by the National Trust for Historic Preservation. Again, along with NMHS, NHF is also working with the navy and organizations such as OpSail to commemorate the bicentennial of the War of 1812.

Closer to its headquarters at the Washington Navy Yard, the NHF under Admiral DeMars’s direction has raised private funds for exhibits for the National Museum of the US Navy, including a Cold War Gallery. In addition, Admiral DeMars has led the efforts to integrate the teaching of science, technology, engineering and math along with naval history, so that middle and high school students visiting navy museums either in person or online can learn about the history of technology in the context of the US Navy’s proud 237-year history. NMHS is honoring Admiral DeMars with the Distinguished Service Award for his outstanding leadership in preserving and commemorating naval history, and educating America about the importance of seapower.

“Admiral Demars has always put country first. His integrity, wisdom, and judgment set the standard not only for America’s ‘silent service’—our submarine fleet, but for our Nuclear Navy, and our nation. I am honored to present this award and to call him my friend.”