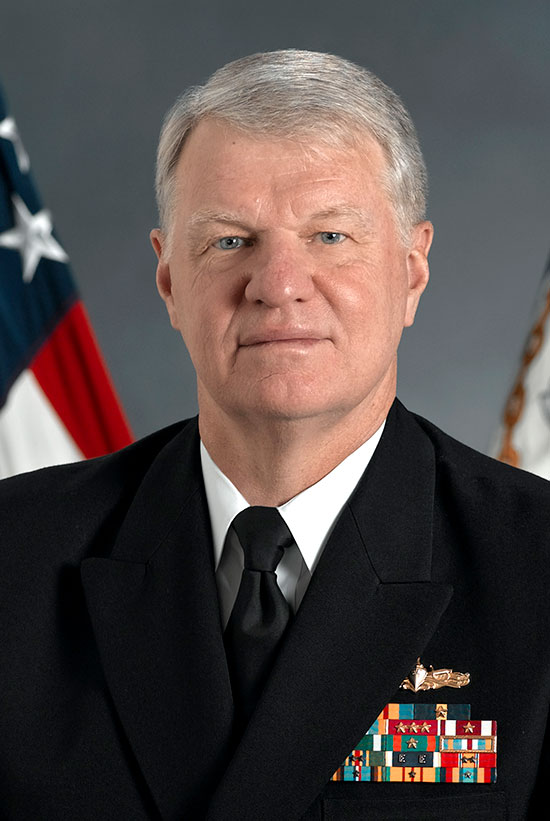 In 2010, Admiral Gary Roughead, USN, Chief of Naval Operations was awarded the NMHS Distinguished Service Award.  We recognized his many accomplishments in the evening’s awards dinner journal:

Admiral Gary Roughead, USN, Chief of Naval Operations, will receive the Society’s Distinguished Service Award, given in recognition of his emphasis on naval history as a Navy-wide discipline, making it a fundamental part of the advancement examinations for senior enlisted personnel. The Society salutes Admiral Roughead for establishing the Naval History and Heritage Command. The Society also salutes his support of archaeological projects such as the search for John Paul Jones’s Bonhomme Richard.

As the Chief of Naval Operations, Admiral Roughead is the highest ranking officer in the US Navy, and one of only two admirals to have commanded both the Atlantic and Pacific fleets. He also serves as a member of the Joint Chiefs of Staff. Admiral Gary Roughead is responsible for the world’s largest combined fleet command, encompassing 102 million square miles and more than 190 ships and submarines, 1,400 aircraft, 191,000 Sailors and Marines and 30,000 civilians. Admiral Roughead is a 1973 graduate of the United States Naval Academy. His awards include the Defense Distinguished Service Medal, Navy Distinguished Service Medal, Defense Superior Service Medal, Legion of Merit, Meritorious Service Medal, Navy Commendation Medal, Navy Achievement Medal, and various unit and service awards.

“We first met in 1996 during a reception aboard the US Coast Guard Barque Eagle. I was commanding the ship…he was the Commandant of Midshipmen at the Naval Academy. A sailor never feels completely comfortable when his ship is in port, and particularly when it is festooned with the decorations and appetizer tables of a social event. I couldn’t help noticing him standing off from the crowd, studying the rigging and the details of the ship. We struck up a conversation that immediately demonstrated to me that he was a true sailor…a man comfortable with, but respectful of the sea.

Our tracklines have crossed over the intervening years, while we represented our respective services in legislative affairs, and more recently while carrying out our responsibilities as senior leaders. His career has been remarkable for his nearly continuous assignment to increasingly responsible and demanding positions of command. Among his six operational commands, Admiral Roughead was the first officer to command both classes of Aegis ships, having commanded USS Barry (DDG 52) and USS Port Royal (CG 73). As a flag officer, he commanded Cruiser Destroyer Group 2, the George Washington Battle Group; and US 2nd Fleet/NATO Striking Fleet Atlantic and Naval Forces North Fleet East. He is one of only two officers to have commanded the fleets in the Pacific and Atlantic, commanding the US Pacific Fleet and Joint Task Force 519, as well as US Fleet Forces Command. Most notably as the 29th Chief of Naval Operations, he provided the vision and guidance for A Cooperative Strategy for 21st Century Seapower, which he endorsed along with the Commandants of the Marine Corps and Coast Guard. He is, with reverence, referred to as a “sailor s sailor.”

The term “shipmate” might be unfamiliar to some of you in attendance tonight, particularly in a town with hardly a ship in sight. We use it as a term of endearment in the Navy and Coast Guard. Webster’s Dictionary simply defines “shipmate” as “a person who serves with another on the same ship.” A rather easy definition if it were really that simple. But those of us who have served significant portions of our life at sea know that there is much more to the definition than that, and if we were to explain it to landsmen, we would define the relationship in terms of teamwork, friendship, and family… all terms that indicate relationships founded on devotion, self-sacrifice, care and concern for others. Our relationships as shipmates are often tested and forged during long deployments, or under the conditions and challenges presented by the unforgiving sea, or even while fighting for good causes. It’s inevitable that your shipmates become a part of your extended family, and as in any good family, feelings of affection, care and respect are developed. By any measure, Admiral Gary Roughead is a good Shipmate.”