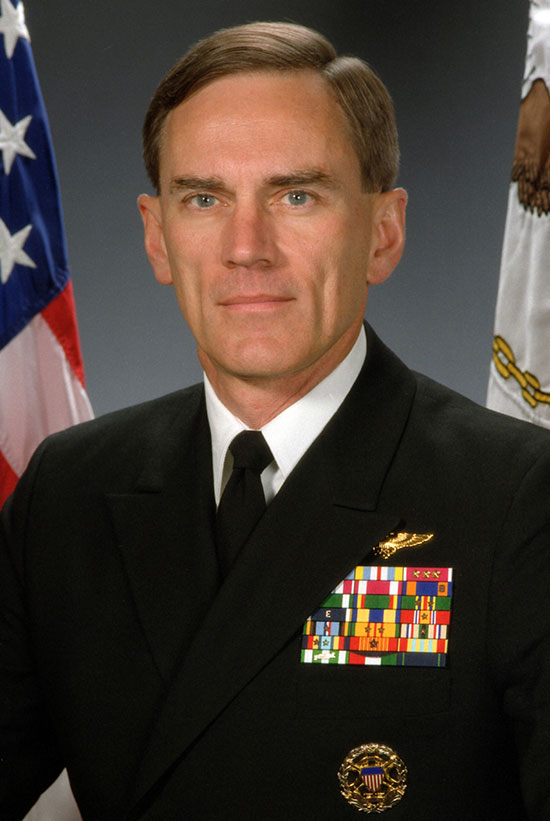 In 2019, ADM Jay L. Johnson, USN (Ret.) was awarded the NMHS Distinguished Service Award.  We recognized his many accomplishments in the evening’s awards dinner journal:

As a Boy Scout in 1960, Johnson attended the Boy Scout National Jamboree at Colorado Springs, Colorado, across from the new US Air Force Academy. When he saw the Air Force Thunderbirds soaring overhead, his future was determined—he was going to be an aviator. Ultimately, it was the Navy that would train him to fly.

A 1968 US Naval Academy graduate, Johnson served as a naval aviator during two combat tours in Vietnam, and later flew F-14 Tomcat fighters, going on to command Fighter Squadron 84. He next commanded Carrier Air Wing One and led its squadrons in a 1986 strike on Libya. Johnson’s first Flag Officer assignment was as Assistant Chief of Naval Personnel for Distribution in the Bureau of Naval Personnel. In 1992, he reported as Commander, Carrier Group 8/Commander, USS Theodore Roosevelt Battle Group, and in 1994 he accepted a new assignment as Commander, Second Fleer/Commander, Striking Fleet Atlantic/Commander, Joint Task Force 120.

During his confirmation, Johnson stated, ‘”As a vision for the future, let me just say that we will steer by the stars and not the wake.” He explained that under his leadership, four stars of equal magnitude in the constellation would guide the US Navy: operational primacy, leadership, teamwork, and pride. Admiral Johnson retired as CNO and as a member of the Joint Chiefs of Staff in 2000, culminating a distinguished 32-year career.

A lifelong history enthusiast, Johnson values the study of history, particularly for those in the Navy:

“Officers make better decisions when armed with the lessons from others’ experiences in history. This awareness is foundational to the success of the institution… it is important to showcase the Navy at every opportunity.” The commemorations for the bicentennial of the War of 1812 and Fleet Week events highlight the Navy’s critical role in our nation’s history and the important role it plays today. The Battle of Midway is considered one of the most decisive American naval battles in history, a yearly commemoration helps new generations understand how this battle in the Pacific in World War II changed the tenor and outcome of the war. Those in the Navy are inspired by this history, which helps solidify their commitment to serve.

Johnson considers his naval career and the chance to serve the greatest privilege in his life, reflecting that the things he learned in flying fighters and leading the Navy have provided the baseline for all his endeavors.

After his retirement from the military, Johnson served in various senior executive roles at Dominion Resources, Inc., from 2000 to 2008. He went on to serve as chairman and CEO of General Dynamics Corporation from 2010 to 2012. He is currently a member of the Council on Foreign Relations and serves as a director of International Paper Company, the US Naval Academy Foundation, the Peregrine Fund, and Wynn Resorts, Ltd.