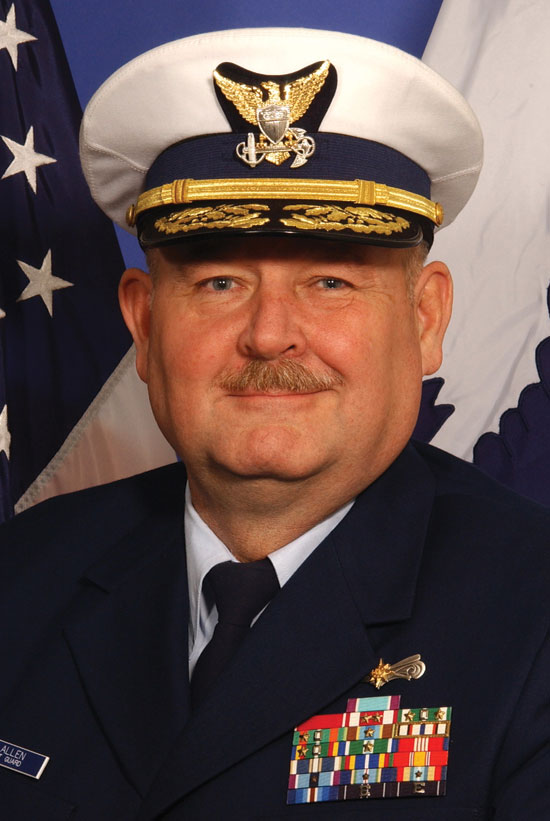 In 2009, ADM Thad W. Allen, USCG (Ret.) was awarded with the NMHS Bravo Zulu Award at the National Maritime Awards Dinner. We recognized his many accomplishments in the evening’s awards dinner journal:

Admiral Thad W. Allen, Commandant of the United States Coast Guard, will receive the NMHS Bravo Zulu Award, in recognition of his heroic and inspirational performance in the fine tradition of the sea services. It is given to Admiral Allen for his exemplary and dynamic leadership of the United States Coast Guard, particularly during Hurricane Katrina, where the world watched as 30,000 people were rescued by the Coast Guard under his command.

Founded in 1915, The United States Coast Guard can trace its roots back to the construction of the nation’s first lighthouse, built in Boston Harbor in 1716. Its antecedents include the Revenue Marine, Revenue Cutter Service, Lifesaving Service, Lighthouse Service, Steamboat Inspection Service, Bureau of Marine Inspection and Navigation, and the International Ice Patrol.

The US Coast Guard is the nation’s fifth military arm, perhaps best known for its role in saving lives and property at sea. Other lesser-recognized roles are as the nation’s maritime law enforcement agency overseeing conservation, immigration and environmental regulations. Further, it is responsible for port security, flood relief, ice breaking, drug interdictions, derelict vessel destruction, regatta and marine patrols, and investigating marine disasters, in addition to other missions.

Admiral Allen assumed the duties of the 23rd Commandant of the US Coast Guard on 25 May 2006. Since Allen took the helm of the Coast Guard, he has been committed to reform and modernization to allow the Coast Guard to manage its operational forces more efficiently. He leads some 91,000 men and women active duty Coast Guard personnel, civilians, reservists and volunteer Coast Guard auxiliarists. Allen said, “The key to current and future success lies in our ability to complete the modernization of our service so that we can effectively and efficiently allocate resources, support our personnel and sustain operational capability.”

During Hurricanes Katrina and Rita, Allen served as the Principal Public Official for response and recovery operations. Because of his leadership during hurricane Katrina, the whole world saw what the Coast Guard does on a daily basis, but usually 50 miles out at sea. His dynamic leadership brought to the forefront of American minds the work of this effective and important organization.

Admiral Allen graduated from the US Coast Guard Academy in 1971; he holds a Master of Public Administration degree from George Washington University, and received their Alumni Achievement Award in 2006. He also holds a Master of Science degree from the Sloan School of Management of the Massachusetts Institute of Technology as a Sloan Fellow, is a Fellow of the National Academy of Public Administration, and is a member of the Council on Foreign Relations. In 2007, Admiral Allen was awarded an Honorary Doctorate of Science from the National Graduate School.

Allen is a native of Tucson, Arizona and the son of retired Coast Guard Chief Damage Controlman Clyde and Mrs. Wilma Allen. Admiral Allen and his wife, Pam, have three children and two grandchildren.