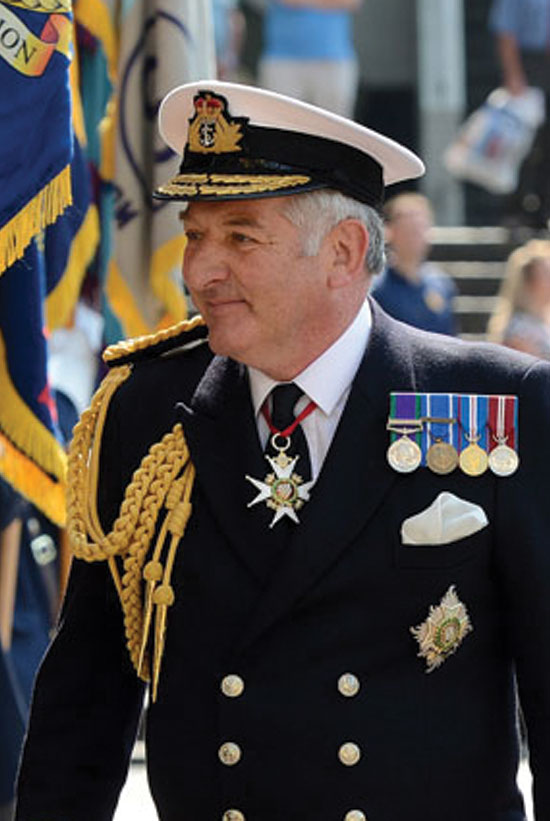 In 2012, Admiral Sir Johnathan Band GCB DL was awarded with the NMHS Distinguished Service Award.  We recognized his many accomplishments in the evening’s awards dinner journal:

Sir Johnathan Band is Chairman of Trustees of the National Museum of the Royal Navy. Prior to this post, Sir Jonathan served as First Sea Lord and Chief of Naval Staff (2006-2009).

Sir Jonathon joined the Royal Navy in 1967, trained at Britannia Royal Naval College Dartmouth, and then underwent Fleet training in ships in the Far East. He then pursued an undergraduate degree at Exeter University. After his graduation, Sir Jonathon served as a junior officer aboard HMS Lewiston and HMS Rothesay, and served on exchange with the United States Navy in USS Belknap. Those tours of duty were followed by junior officer staff and warfare training, and two years as Principle Warfare Officer and Operations Officer in the frigate HMS Eskimo. Between 1981 and 1983 Sir Jonathon Band served as Flag Lieutenant to Commander-in-Chief Fleet, a period which included the Falklands Campaign. His commands in the Royal Navy included the minesweeper HMS Soberton in the Fishery Protection Squadron around the coast of the United Kingdom; the frigate HMS Phoebe, operating in the NATO area; and HMS Norfolk in the first Type 23 Frigate Squadron. His last sea command was the aircraft carrier HMS Illustrious, between 1995 and 1997, supporting United Nations, and then NATO operations in Bosnia.

Promoted to Rear Admiral in May 1997 and to Vice Admiral in 2000, Sir Jonathon became the Deputy Commander-in-Chief Fleet in May 2001. He was promoted to Admiral in August 2002 on becoming Commander-in-Chief Fleet and Commander Allied Maritime Component Command Northwood. This period in Command saw the Iraq Campaign, the major re-organization of the Fleet Command and subsequent changes in NATO. He was appointed First Sea Lord and Chief of Naval Staff in February 2006, a position he held until July 2009, a time dominated by the Afghanistan campaign. After his retirement from the Royal Navy, Sir Jonathon took on directorship positions with Carnival Corporation /PLC, Lockheed Martin, Babcock International and MooD International.