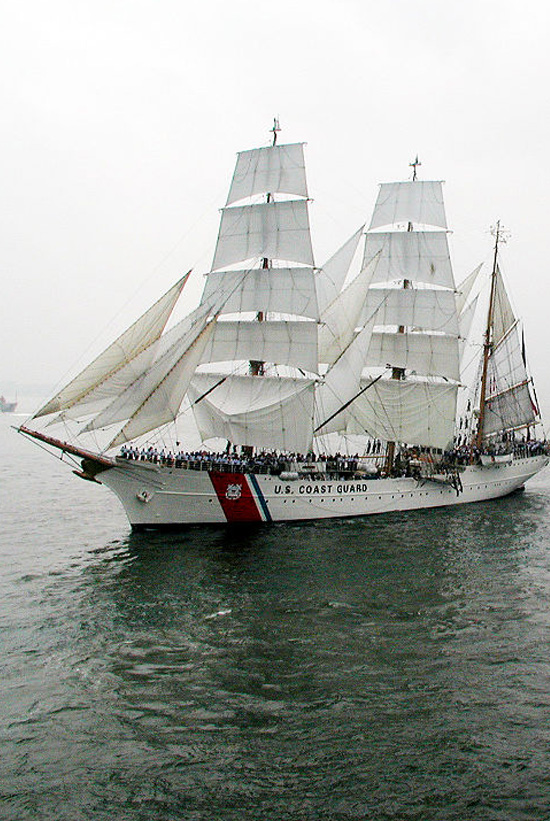 USCGC Eagle is the seventh US Coast Guard cutter to bear the name in a proud line dating back to 1792. The ship was built in 1936 by the Blohm + Voss Shipyard in Hamburg, Germany, and commissioned as Horst Wessel. Now known as the Barque Eagle, she is a 295-foot vessel used as a training cutter for future officers of the United States Coast Guard. With a standing permanent crew of seven officers and 50 enlisted members, on training missions she takes on a variety of temporary crew and sails with an average complement of 12 officers, 68 crew, and up to 150 trainees. Cadets and officer candidates receive instruction from the crew and also take classes on navigation, seamanship, ship and boat maneuvering, line handling, sailing, first aid, weather patterns, damage control, engineering, career development, and more. They also stand watches in the engine room, on the bridge, on deck, in the scullery and galley, and during port calls, they assist the public by giving tours.

Eagle‘s secondary mission is to represent the US Coast Guard and the United States, and in this role, she has earned the nickname of “America’s Tall Ship.” During her many years of service as a Coast Guard cutter, she has traveled throughout the United States and around the world. Among her various deployments, Eagle has participated in Tall Ship races and events, including the Operation Sail events of 1964, 1976, 1986, 1992, 2000 and 2012. In 1976 Eagle led the parade of ships into New York Harbor during the American Bicentennial OpSail ‘76.

Albert W. Gatov, 1907–1978, was chairman of the Federal Maritime Board during the Truman administration and was appointed by President Carter to serve on the National Advisory Commissions on Oceans and Atmosphere. He was also president of the San Francisco Maritime Museum Association. Gatov attended schools in southern California and became a specialist in ocean shipping management. After army service during World War II, he became president of the Pacific-American Steamship Association. In 1950 President Truman appointed him to the Federal Maritime Board, now is known as the Federal Maritime Commission, which regulates US oceanic shipping operations. He also served from 1962 to 1965 as a member of the International North Pacific Fisheries Commission.