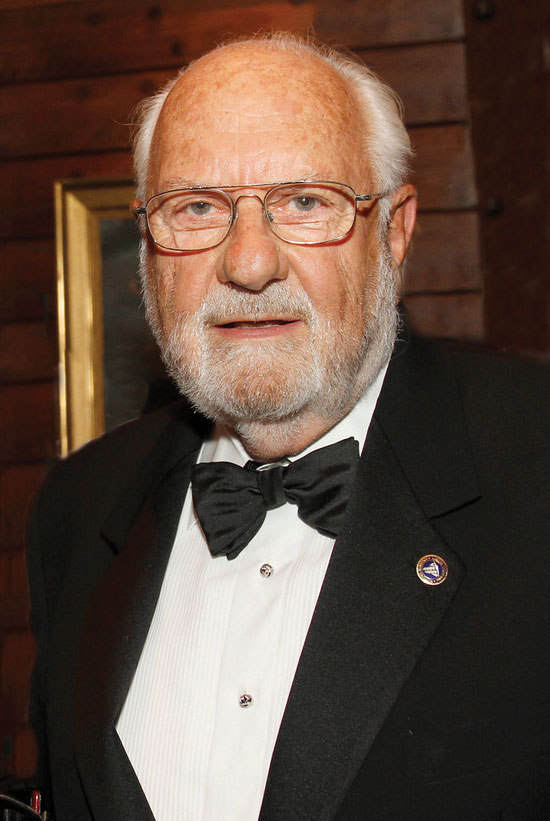 In 2016, Capt. Cesare Sorio was awarded with the David A. O’Neil Sheet Anchor Award at the Annual Awards Dinner. We recognized his many accomplishments in the evening’s awards dinner journal:

Cesare Sorio’s sailing career began when he was a teen, working summers on board both sail and motor yachts as a deck boy and sailor. He attended the Italian Merchant Marine Academy, majoring in deck sciences and with minors in naval architecture and marine engineering. He graduated first in his class in 1955. For the next twelve years he served on board fifteen tankers and a passenger vessel. In 1967 he accepted an offer to establish a career ashore, but he also served another six months aboard a tanker. All told, he has held the positions of deck cadet, 3rd officer, 2nd officer, chief officer, staff captain, and master. His first command was the 28,000 DWT tanker TT Margarita.

Once ashore, he became involved in all aspects of shipbuilding and ship conversion and repair, vessel purchasing and sale, economics of transportation and marine operations, progressing from the position of shipbuilding supervisor to senior vice president. After working for various international oil companies, he co-founded the maritime consulting group, S. J. Marine, doing consulting work in the design and construction, commercial and marine operations of vessels of various types, from oil tankers to dry cargo and LNG carriers, drill ships, tugs and barges. He retired from that business in 2011.

Captain Sorio continues to be involved with the industry, maintaining his affiliation with the Italian Masters and Chief Engineers Association and the Society of Naval Architects and Marine Engineers (SNAME). He also is a member of the American Bureau of Shipping’s Council and Classification Committee and a commissioner of Harbor Management for the Town of Guilford, Connecticut.

Captain Sorio first encountered NMHS as a reader of Sea History magazine. He became a member in 1993, and in 2007 he was elected to the board of trustees. His knowledge and talent have been invaluable on the NMHS Executive Committee and as chairman of the Program Committee. Thanks to his leadership and outreach, NMHS is a stronger and more influential Society. The David A. O’Neil Sheet Anchor Award, given in recognition of extraordinary leadership in building the strength and outreach of the Society, will be presented to Captain Cesare Sorio by NMHS Chairman Emeritus Walter Brown.

“I first met Captain Cesare Sorio in the early 1990’s at a Connecticut Maritime Association outing sponsored by Clay Maitland’s company. You could tell immediately that he was a master mariner with tons of sea going experience-the real deal! We are so lucky to have a person with his background and enthusiasm involved with NMHS and over the years he has not only contributed so much to the organization but has also taken part in many of the far ranging expeditions which NMHS offers. It is an honor to be the one that presents the NMHS David A. O’Neil Sheet Anchor Award to Captain Cesare Sorio.”—Walter Brown