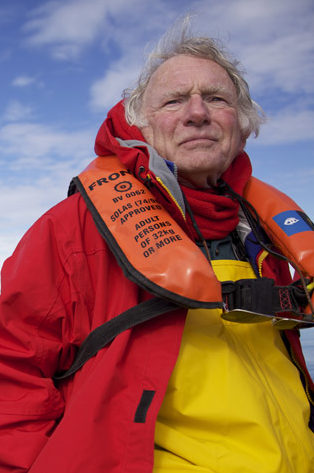 In 2012, CAPT Don Walsh, USN (Ret.) was awarded with the NMHS Distinguished Service Award at the Annual Awards Dinner. We recognized his many accomplishments in the evening’s awards dinner journal:

Lieutenant Don Walsh made history in January 1960 when he and Swiss oceanographer Jacques Piccard dove the bathyscaphe Trieste to the deepest place in the world’s oceans, the Mariana Trench. Designated USN Deep Submersible Pilot #1, then Lt. Walsh was also the first submersible pilot in the US, and the first officer-in-charge of the Trieste at the Navy Electronics Laboratory in San Diego. Their groundbreaking descent stood unmatched for 52 years.

Born in Berkeley, California, Don Walsh grew up in the San Francisco Bay area. He joined the US Navy in 1948, and served as an aircrewman in torpedo bombers until he entered the Naval Academy in 1950. He followed up his academy years with two years in the Amphibious Forces, followed by submarine school, and service in the submarines Rasher (SSR-269), Sea Fox (SS-402), and Bugara (SS-331), eventually commanding Bashaw (AGSS-241). Following command of Bashaw, Lt. Walsh served aboard the Trieste from 1959-1962 and made the historic descent with Piccard.

Promoted to commander, Captain Walsh went on to serve as Special Assistant (Submarines) to the Assistant Secretary of the Navy for Research and Development, and later as Deputy Director of Navy Laboratories. His 24-year naval career included service in both the Korean and Vietnam wars. During this period, Captain Walsh pursued a PhD in oceanography from Texas A&M University, focusing on remote sensing, and in l969 earned an MA in political science from San Diego State University, where his research was on law-of-the-sea issues.

In 1975 Captain Walsh retired from the US Navy to be a professor of ocean engineering at the University of Southern California; he was the founding director of the Institute for Marine and Coastal Studies. He then founded the Oregon-based consulting company, International Maritime Inc., and he continues to run that business today. Since 1959 Captain Walsh has participated in diving operations with more than two dozen manned submersibles, piloting seven of them, and he has participated in more than 50 polar expeditions. Captain Walsh dove to the Mid-Atlantic Ridge near the Azores, to the wreck of RMS Titanic, and to the WWII German battleship Bismarck. He has been active in the design, manufacture and operation of manned and unmanned submersibles. Captain Walsh also served as technical advisor for the deep-sea explorations of the well-known James Cameron, who set another deep-sea record this year.

In recognition of his four decades of work in the design, construction and operation of undersea vehicles, Captain Walsh was elected to the National Academy of Engineering, and the Explorers Club has awarded him their Lowell Thomas Medal and Explorers Medal. The Jules Verne Adventures organization awarded him its Etoile Polaire medal. In 2001 he was also named as one of the great explorers in the Life magazine volume The Greatest Adventures of All Time. Captain Walsh was awarded the National Geographic Society’s highest award, the Hubbard Medal, in 2010.

It is in recognition of this remarkable record of research, stewardship and service that the National Maritime Historical Society is awarding Dr. Don Walsh its Distinguished Service Award.

Since receiving the National Maritime Historical Society’s Distinguished Service Award in 2012, I have continued my international consulting practice, focusing on ocean related projects.  Over those past eight years, my work has taken me on average to 8 nations each year.  Also, I have made several shipboard expeditions to the Arctic and Antarctica as an expedition staff member.  This continues my 50 years of going to the Polar Regions for various activities.

Last year, I had the honor of being on a return diving expedition to Challenger Deep, the oceans’ deepest place.  I was first to dive there in 1960.  This time I did not dive, but was witness to four successful dives there.  Then this year, my son was on board that submersible and dove to the same place on the seafloor that I visited six decades ago.

Today, the pandemic has grounded me but social distancing has not been difficult.  My wife and I deliberately chose it 30 years ago when we moved from Los Angeles to our remote ranch in Southwest Oregon. The stay-at-home situation has given me months of time to work on long deferred writing projects ranging from book length to newsletter contributions.