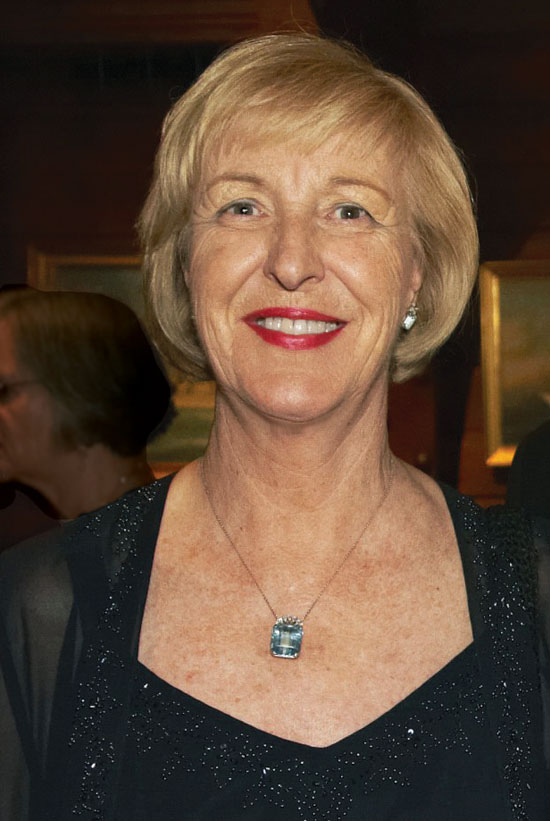 In 2019, Capt. Jean Wort was awarded with the David A. O’Neil Sheet Anchor Award at the Annual Awards Dinner. We recognized her many accomplishments in the evening’s awards dinner journal:

Captain Jean Wort will receive the 2019 NMHS David A. O’Neil Sheet Anchor Award in recognition of her many outstanding contributions to the National Maritime Historical Society, serving 25 years as a trustee and six years as secretary, effectively advancing its mission and broadening its outreach. Wort established a formal yearly program through the NMHS Seminar Series (formerly the Charles Point Council), regional maritime excursions, and other outreach events for the Society to maximize its effectiveness. She has worked nationally and internationally to promote the organization and has represented the Society at conferences and maritime events around the world. She is an integral member of the executive committee and her vision, effort, and generosity have been critical to the Society’s success.

A native of England, Wort became fascinated by ships and boats growing up along the banks of the Manchester Ship Canal. Her family moved to Brazil when she was eleven years old and emigrated aboard the Royal Mail Lines Highland Princess. During the next ten years, she made several Atlantic crossings by ship between South America and Europe. She went on to work in Hamburg for the Turkish State Shipping Company; and in England she edited travel guides for Thompson Press. Later, in Lisbon, where she managed a tourism and land development company, she met and married John Wort, a retired US naval officer working for CPC International.

With a move to the Hudson Highlands in New York State in 1980, Wort became inspired by the beauty of the Hudson River and wanted to encourage people to enjoy it and learn about its history and heritage. In 1982, she led a local group of supporters to bring the historic 1917 passenger vessel Commander up the river and form Hudson Highlands Cruises & Tours to provide excursions, parties, and a floating classroom for school children. M/V Commander was listed on the National Register of Historic Places in 1984.

“Of course, my big passion has always been providing access, because there is nothing like getting out onto the Hudson River to really appreciate it; that is something I have always believed in and worked toward.” Wort has been a pioneer in providing access to the river and classes on its history and ecology: she worked with the City of Peekskill to provide docking and river access from the Riverfront Green Park and Charles Point Pier. Wort continues her work to promote Hudson River history and river access for all; she is active on the board of the Friends of the Scenic Hudson Mine Dock Park and kayak launch, working with the Town of Highlands, New York.

In November 2016, the Hudson River Sloop Clearwater organization recognized Wort for her “generosity, leadership, and commitment to the Hudson River” with its Spirit of the Hudson Award. The annual award recognizes individuals who exemplify the environmental values and spirit of Clearwater’s founder, Pete Seeger.

Governor George Pataki appointed Wort to serve as commissioner for Orange County for the 2009 Hudson Fulton Champlain Quadricentennial Celebration. This commission planned and developed the 400th anniversary celebrations of the voyages of discovery made by Henry Hudson and Samuel de Champlain, as well as the 200th anniversary of Robert Fulton’s steamship voyage along the Hudson River.

Wort serves on the advisory council for the Orange County Land Trust and the SS Columbia Project. She has served on the Town of Highlands Planning Board, and as a trustee of the Hudson Highlands Land Trust, the Nature Museum of the Hudson Highlands, the Orange County Citizens Foundation, and the Fort Montgomery Battle Site, and is involved in preservation efforts with the Constitution Island Association and Quassaick Creek Coalition.