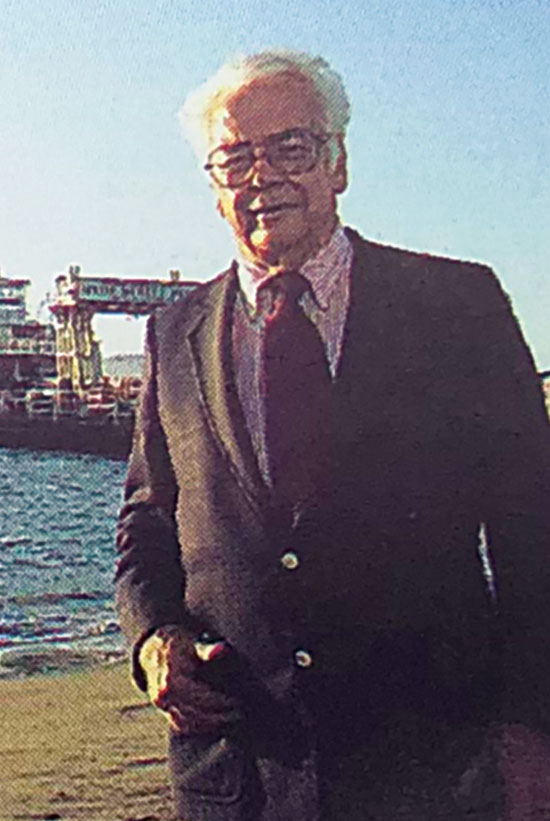 Karl Kortum, dean of the historic ships movement, was raised on a farm in Petaluma, California. The Kortums were a proudly independent family of predominently German stock, who had been winegrowers until the era of Prohibition. As a youth Karl formed a Sea Scout group with his chum Harry Dring. Their great dream was to go to sea in one of the square-rigged deepwatermen laid up in Bay waters. In 1944 the romantic dream came true when Captain Hjalmar Wigsten signed on Karl and Harry as hands to sail the Maine-built bark Kaiulani to South Africa with a cargo of lumber. They heard the news of the Japanese attack on Pearl Harbor while off Cape Horn. Sailing on from Durban to Sydney, Australia, the “old barky,” as they called her, was hulked for use as a US Army barge. Karl helped organize the “small ships” fleet that supplied Allied forces in New Guinea, then went to sea himself as mate of the transport Octorara. After his return to the US after the war, he founded the San Francisco Maritime Museum in 1951, with the help of his great friend the late Scott Newhall and the young newspaper reporter Dave Nelson. It soon became one of the greatest historic ship centers in the world, on a par with Mystic Seaport. Karl went on to found NMHS in 1963 and helped found the South Street Seaport Museum in New York in 1967. —Peter Stanford, Excerpted from “Karl Kortum (1917–1996): A Garland of Remembrance,” SH80:14