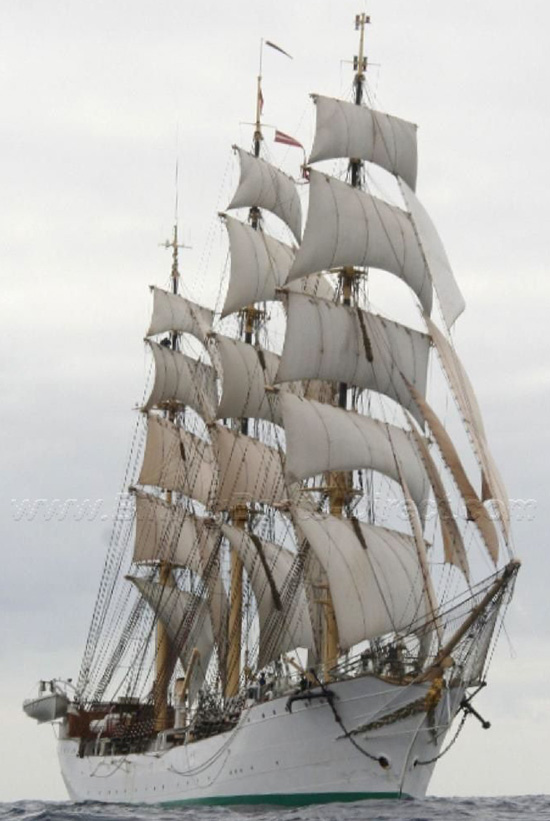 Danmark is a steel-hulled, three-masted and full-rigged ship, built as a training ship and launched in 1932 at the Nakskov Shipyard in Denmark. The ship is registered in Denmark and is national property, and in recent years has mostly sailed in European waters, with the exception of special occasions when she crosses the Atlantic Ocean to visit the US, with which Danmark has special ties. From 1940 – 1945 during World War II, Danmark was temporarily assigned to the US and used as a training ship for naval cadets, a Danish gesture still remembered and appreciated in the US.

In 1939 she visited the United States to participate in the 1939 World’s Fair in New York City, but at the outbreak of hostilities in World War II, she was ordered to remain in US waters to avoid German capture. Danmark was then based in Jacksonville, Florida and maintained with the help of the Danish American community there.

After the attack on Pearl Harbor, Captain Knud L. Hansen offered the ship to the US government as a training vessel. This offer was accepted, and Danmark moved to New London, Connecticut to train United States Coast Guard Academy cadets. Approximately five thousand cadets were trained before the ship was returned to Denmark in 1945. Her designation in the US Coast Guard was USCGC Danmark (WIX-283). In recognition of her wartime service, Danmark was given the honor of leading the parade of ships at the 1964 World’s Fair in New York.  Experience with Danmark led to the acquisition of the USCGC Eagle from Germany at the end of the war as a training vessel.