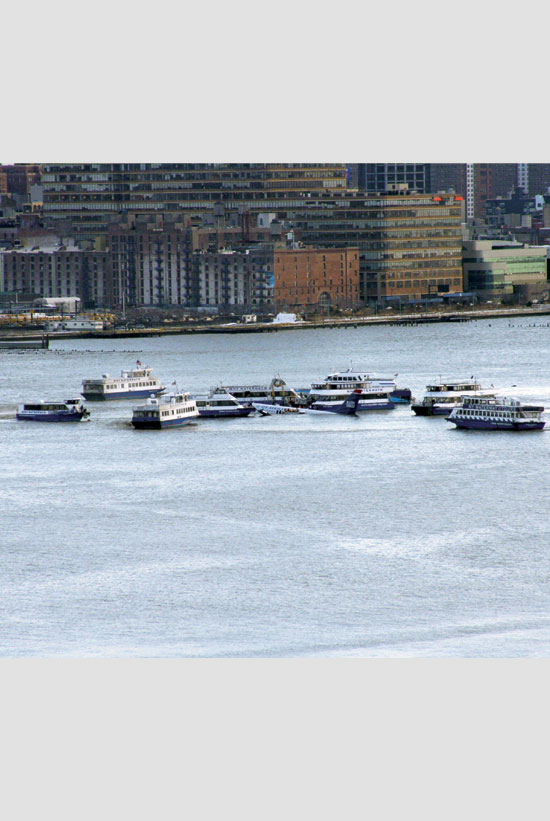 Captains of the Miracle on the Hudson

In 2009, the Captains of Miracle on the Hudson were awarded the NMHS Bravo Zulu Award.  We recognized their many accomplishments in the evening’s awards dinner journal:

The captains and crews, along with the other ferries responding, began methodically rescuing the plane’s passengers as the world watched the effective rescue operation. Their inspirational efforts on that frigid January day brought to the forefront of American minds the spirit of initiative and bravery in helping our fellow man, a long-honored maritime tradition.

The Society has a long tradition of honoring seafarers and recognizes the ingenuity and courage of the masters of the vessels that made this total life saving mission possible. The Society also honors the many other individuals who were involved in making the quick and efficient rescue of the Flight 1549 crew and passengers a total success, as more than 100 Good Samaritan mariners responded to the scene of the crash instantly, demonstrating remarkable preparedness, seamanship and courage while rescuing all 155 people despite near-freezing water temperatures, and quickly and effectively providing vital staging areas on shore for first responders and survivors.

In particular, the Society honors Mr. Arthur Imperatore, Sr., a visionary who brought ferry service back to New York Harbor. NY Waterway ferryboats from his company were the first on the scene and responsible for most of the rescues. NMHS honors the US Coast Guard, the emergency services of New York and New Jersey, and those helping on shore. Each story is remarkable, and heartfelt. To the captains, and to everyone involved, Bravo Zulu.

A Message from Captain Sullenberger:

It is with great pleasure that I commend the heroic efforts of the ferryboat captains and their crews who helped save so many lives on January 15, 2009 in New York’s Hudson River. Their courage, skill, determination, and quick actions made all the difference in the successful outcome. I will be forever grateful to them and to the other rescuers for coming so quickly and effectively to the aid of the passengers and crew of US Airways Flight 1549. A bond has been forged in history that will forever tie us to the events of that day and to each other. I owe a debt of gratitude to every one of these maritime professionals and congratulate them on receiving this well-deserved recognition from the National Maritime Historical Society.