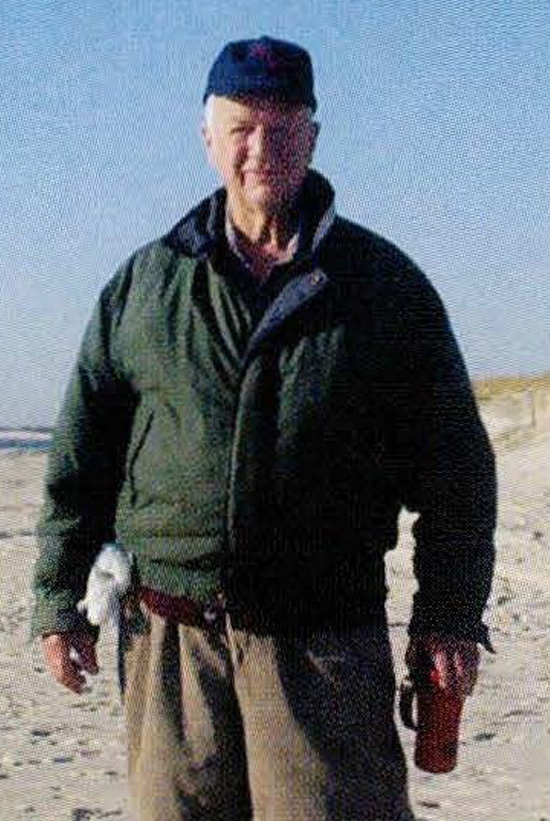 The Volunteer Appreciation Award has been presented since 1996 in grateful recognition of the enduring dedication of outstanding volunteers of the National Maritime Historical Society.

For over 39 years, Commander Thompson was an instructor at the US Merchant Marine Academy at Kings Point, New York. A native of Massachusetts, he graduated from Massachusetts Maritime Academy and later earned a bachelor’s degree from Columbia University. As a merchant mariner, he primarily sailed the run from New York to California through the Panama Canal—a voyage he made more than 25 times. He signed up in 1938 for the United States Maritime Service and served as a third mate through chief mate in the Merchant Marine for six years during World War II. He was stationed on board a merchant vessel that delivered tanks to British forces in Egypt, by way of the Cape of Good Hope to the Red Sea, to be used to help stop the German-Italian forces under German general Erwin Rommel. On their return, Thompson’s ship was torpedoed and sunk by a German U-boat on 15 June 1942. Rescued by the Navy, he and his shipmates were put ashore in nearby Trinidad. Tommy went on to join the faculty at the US Merchant Marine Academy, teaching collision prevention, nautical science, rules of the road, firefighting, cargo handling, and seamanship. He enjoyed competitive sailing as well, competing in six Newport-to-Bermuda races, primarily as navigator, but as captain in his sixth race.

In his retirement, Tommy served as the volunteer librarian of the National Maritime Historical Society for over fifteen years. When he took on the task, NMHS owned thousands of maritime books, all stored in boxes and in complete disarray. Tommy sorted, categorized, and organized over 7,000 books on the shelves, turning a disorganized and unusable collection into an orderly and functioning system. His extensive maritime background proved critical in his ability to organize the library so successfully. Tommy’s ability and steadfast dedication to getting the job done, his knowledge and the ever twinkle in his eye were an inspiration and pleasure to everyone.