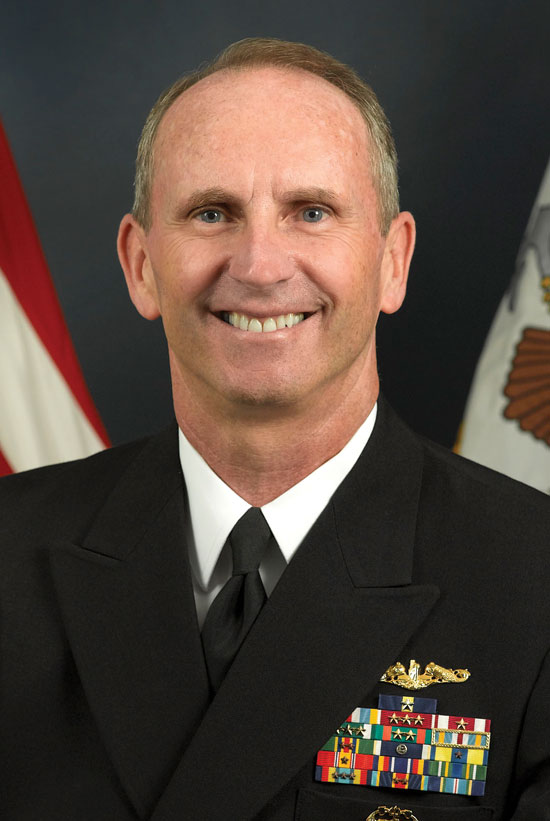 In 2015, CNO ADM Jonathan W. Greenert, USN (Ret.) was awarded with the Naval Historical Foundation Distinguished Service Award. We recognized his many accomplishments in the evening’s awards dinner journal:

A native of Butler, Pennsylvania, Admiral Jonathan W. Greenert graduated from the US Naval Academy in 1975 and completed studies in nuclear power for service as a submarine officer. His career as a submariner includes assignments aboard USS Flying Fish (SSN 673), USS Tautog (SSN 639), Submarine NR-1 and USS Michigan (SSBN 727), and command of USS Honolulu (SSN 718) from March 1991 to July 1993. His fleet command assignments include Commander, Submarine Squadron 11; Commander, US Naval Forces Marianas; Commander, US 7th Fleet (August 2004 to September 2006); and, Commander, US Fleet Forces Command (September 2007 to July 2009).

ADM Greenert’s fleet support and financial management positions include deputy chief of Naval Operations for Integration of Capabilities and Resources (N8); deputy commander, US Pacific Fleet; chief of staff, US 7th Fleet; head, Navy Programming Branch; and director, Operations Division Navy Comptroller. He served as 36th vice chief of naval operations (August 2009 to August 2011). He is a recipient of various personal and campaign awards including the Distinguished Service Medal (six awards), Defense Superior Service Medal and Legion of Merit (four awards). In 1992 he was awarded the Vice Admiral Stockdale Award for inspirational leadership. He considers those awards earned throughout his career associated with unit performance to be most satisfying and representative of naval service.

On 23 September of 2011 he became the 30th Chief of Naval Operations. As CNO, ADM Greenert has presided over the US Navy’s commemoration of the bicentennial of the War of 1812, supported ongoing oral history projects, and supported the work of the Naval History and Heritage Command. Former Director of Naval History Captain Henry J. Hendrix observed: “He championed NHHC within the budget process, making the three stars understand that investing in NHHC was one of his priorities.” For his contributions to the promotion of naval history, the Naval Historical Foundation (NHF) is proud to present ADM Jonathan Greenert its inaugural Distinguished Service Award.

In honoring Admiral Greenert, the Naval Historical Foundation and NMHS are also paying tribute to the centenary of the position of chief of naval operations. In the period leading up to World War I, our national leaders saw that it was likely that the country would be drawn into the next great conflict, and they recognized that the US Navy would be strengthened by a more streamlined organization, more closely resembling that of the US Army. On 3 March 1915 Congress enacted legislation to create the position of chief of naval operations, and Rear Admiral William S. Benson was appointed to the post, reporting to Secretary of the Navy Josephus Daniels. Some of the more famous chiefs of naval operations have been Admiral Ernest J. King, who simultaneously held the positions of CNO and Commander-in-Chief, US Fleet (CINCUS) during World War II; and Admiral Arleigh Burke, the longest-serving CNO, who held the office during the years 1955–1961.

Today, the CNO is usually the most senior officer in the Navy. Reporting to the secretary of the navy, the CNO is responsible for command, utilization of resources, and the efficiency of the operating forces and shore activities of the Navy. He is a member of the Joint Chiefs of Staff, and is a principal advisor to the president and the secretary of the navy on the conduct of war and activities of the Department of the Navy.