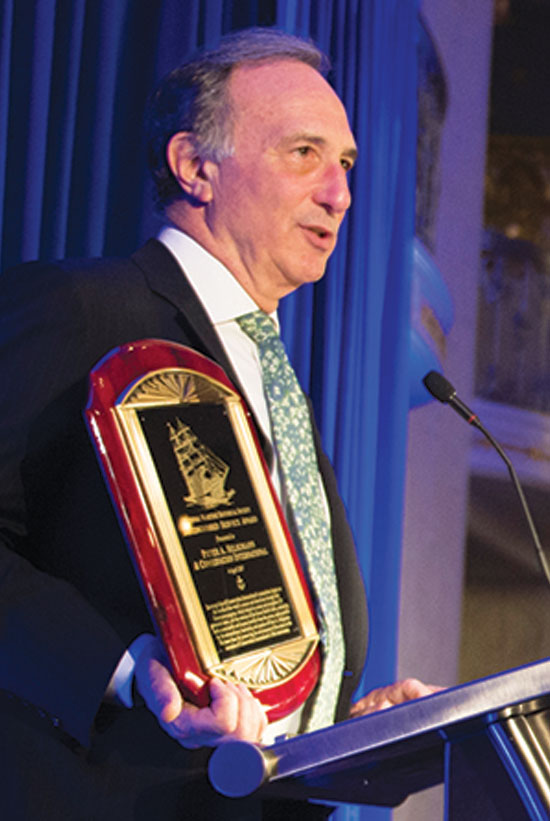 In 2017, Peter Seligmann was awarded with the NMHS Distinguished Service Award.  We recognized his many accomplishments in the evening’s awards dinner journal:

Peter Seligmann discovered an affinity for our natural environment on family summer vacations in Wyoming; he pursued this interest in his college studies at Rutgers University, graduating with a degree in wildlife ecology, following with a master’s degree in forestry and environmental science from Yale University. In 1976 he began work at the Nature Conservancy as its western land steward, overseeing the organization’s preserves in thirteen western states. With his friend and former Yale classmate Spencer Beebe, he established the Nature Conservancy’s international office to expand the organization’s work.

In 1987, Mr. Seligmann and Mr. Beebe founded Conservation International (CI), a global nonprofit developing partnerships with governments, communities, and businesses to ensure sustainability of natural resources. That year, CI signed the first debt-for-nature swap, acquiring debt from Bolivia in exchange for that country’s protection and expansion of the Beni Biosphere Reserve. CI focuses on innovative solutions such as the swap to foster lasting improvements that benefit human communities as well as the environment, and helps businesses find ways of adapting their operations to reduce negative environmental impact.

Protection of our oceans is a key part of Cl’s work. The organization is a leader in the development of marine protected areas: internationally recognized areas of ocean, or of land and ocean combined, where human activities such as tourism, development and fishing are managed to ensure sustainability. CI was also a pioneer in the seascape approach to addressing ocean health, forging partnerships to manage larger, multi-use marine areas in a way that best serves both ecological concerns and the human community. Conservation International has worked with stakeholder communities to improve management across four seascapes: Abrolhos Seascape in Brazil; Bird’s Head Seascape in Indonesia; Eastern Tropical Pacific Seascape in Costa Rica, Panama, Colombia and Ecuador; and Sulu-Sulawesi Seascape in the Philippines, Malaysia and Indonesia.

Conservation International is a founder of the Ocean Health Index and serves as the managing partner. The organization works closely with the National Center for Ecological Analysis and Synthesis to incorporate the most up-to-date scientific methodology, produce annual global assessments and work with governments, scientific organizations and NGO partners to apply the OHI on regional and local scales.

Mr. Seligmann serves on the advisory council for the Jackson Hole Land Trust, and he is a member of the Council on Foreign Relations. He was named to the Enterprise for the Americas Board by President Clinton in 2000. The National Maritime Historical Society is proud to present the Distinguished Service Award to Conservation International and founder Peter A. Seligmann, on the occasion of CI’s 30th anniversary, for its tremendous impact on the health of the world’s oceans and shorelines. Their conservation effort protects our maritime heritage on a global scale.