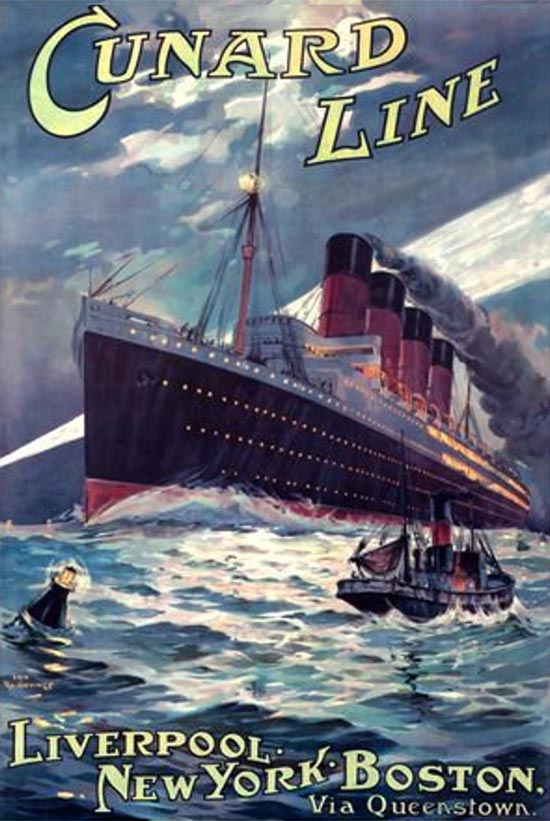 In 2013, Cunard Line was awarded with the NMHS Distinguished Service Award.  We recognized its many accomplishments in the evening’s awards dinner journal:

In 1839, Samuel Cunard was first awarded a contract to carry mail between Liverpool and Halifax, Boston and Quebec. The British and North American Royal Mail Steam Packet Company began with a fleet of four steamships: Britannia, Acadia, Caledonia and Columbia. The 1,156-ton Britannia set out from Liverpool on the firm’s inaugural voyage to Halifax on 4 July, 1840, and arrived in Boston fourteen days and eight hours later. Within a year, Cunard ships were providing weekly steamship service across the Atlantic, and the short duration of the journey—just ten days, instead of the six weeks required for a crossing by sail—and reliable departure and arrival schedule appealed to the traveling public. The Cunard fleet grew with the popularity of steam-powered transAtlantic travel.

In 1854, fourteen Cunard ships—nearly the entire fleet—were requisitioned for service in the Crimean War, a contribution that included transporting the horses that charged with the Light Brigade. The tradition of serving in wartime continued through the first and second world wars; Cunard ships transported men, food and munitions, and they served as hospital ships, prisoner-of-war ships, and armed merchant cruisers. In World War II, Queen Mary and Queen Elizabeth carried as many as 15,000 soldiers per voyage—so many that the men had to sleep in shifts, and a one-way traffic pattern was needed to allow them to move about. The tradition of wartime service continued in the early 1980s, carrying troops during the Falklands War.

Many of history’s most famous liners have been Cunard ships: Carpathia, which raced to rescue survivors of the Titanic; Mauretania, which held the Blue Riband for the fastest transAtlantic crossings for 22 years; and the Carmania, which took the first German casualty of war in 1914. The liners Queen Mary and Queen Elizabeth reigned over the golden years of transAtlantic service in the 20th century, and when the two were retired in the 1960s, Cunard launched Queen Elizabeth 2, which sailed for just over 40 years. Carnival Corporation purchased Cunard in 1998, and announced the construction of a new transAtlantic liner, the Queen Mary 2, completed in 2004 and the largest liner ever built. Queen Victoria and Queen Elizabeth were subsequently added to the fleet, carrying the Cunard tradition of steaming across the Atlantic in style into the present century. It is for this unsurpassed history of transAtlantic and wartime service that NMHS  honoring Cunard with the Distinguished Service Award—the first time in NMHS history that this award will be presented to a company, rather than an individual or group.

Accepting the award on behalf of Cunard will be Cunard VP North America, Stanley Birge. Mr. Birge joined Cunard in September of 2012, to lead commercial operations, customer service, marketing and public relations for North America, working with the Los Angeles-based Cunard team as well as with the company’s leadership group in its UK headquarters. Prior to that position, he was director of commercial operations at Cunard’s sister company, Princess Cruises, overseeing the development and growth of the Princess brand in Australia. He holds bachelor’s degrees in engineering and physics from Westmont College in Montecito, California; and in mechanical engineering from UC Santa Barbara. He also holds a master of science in materials science and engineering from UCLA, and an MBA from Pepperdine University.