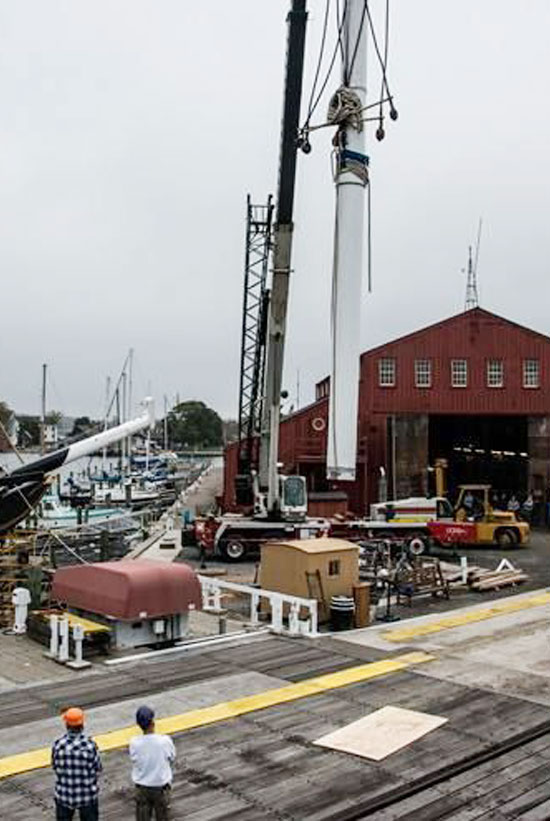 In 2010, Dana Hewson, Quentin Snediker, and the staff and volunteers of Mystic Seaport’s Henry B. duPont Preservation Shipyard were awarded with the NMHS Distinguished Service Award.  We recognized their many accomplishments in the evening’s awards dinner journal:

Mystic Seaport stands out as a beacon of hope for the beleaguered ship preservation community, not only restoring historic ships but also building important reproductions like the Amistad. At a time when some museums are considering giving up the stewardship of historic ships in their care, Mystic Seaport has taken bold strides to properly care for its historic ships and boats, and they do it all in-house.

Of great significance is Mystic’s commitment to the restoration of the 1841 whaleship Charles W. Morgan, a National Historic Landmark. Last year, they announced that they will not only restore the ship so she remains stable at the wharf, but that they are taking her restoration one step further: the goal is to restore her to seaworthy condition and take her to sea again, under sail. Built by Jethro & Zachariah Hillman of Fairhaven, MA, the Morgan sailed for eighty years before retiring from whaling. Today, she remains the last wooden whaleship in the world—an icon of America’s seafaring history. More than 20 million visitors have come to Mystic Seaport to walk her decks and experience American maritime heritage in a unique and personal way.

But, it is the people and their skills, learned and passed along, that are the heart of all heritage work. NMHS is honored to recognize Dana Hewson and Quentin Snediker and their staff and volunteers for their talents, dedication, and skill, and for the long hours and commitment to the ships that are an inspiration to all.

Dana Hewson has been an integral part of the Mystic Seaport shipyard and waterfront since he joined the museum as a shipkeeper in 1977. Currently Vice President for Watercraft Preservation and Programs and Clark Senior Curator for Watercraft, Dana has been involved with all aspects of maintenance, restoration, and operations related to the Museum’s watercraft collection. With a degree in Resource Management, he brings knowledge and experience in forest management to the acquisition of timber used in the preservation work of the Museum. Dana has also played a leadership role in seminal watercraft projects, most notably the building of the Amistad, where he was involved at a senior level in the project, from its earliest planning stages through the construction, launch and delivery to Amistad America, Inc. Additionally, Dana has responsibility for a broad range of programs and events including Sabino operations, the museum’s transient dockage business, the John Gardner Boatshop classes, the Brilliant program, and the museum’s Boathouse program.

Dana’s influence reaches far beyond the museum. He is currently the vice president of the Council of American Maritime Museums and has served in an advisory capacity for such diverse vessels as Ernest Hemingway’s Pilar at the Hemingway home in Havana, Cuba; the National Park Service’s steam schooner Wapama in San Francisco, California; Ernestina in New Bedford, Massachusetts; and the Evelina M Goulart at the Essex Shipbuilding Museum in Essex, Massachusetts.

Quentin Snediker has a life-long passion for things maritime. He grew up on Long Island, NY, where he began to learn about the sea and ships. He is a 1972 graduate of SUNY Maritime College at Fort Schuyler, with a BS in Marine Transportation and holds an MA in Historic Preservation from Goucher College. Throughout his career he has supervised the construction and maintenance of, as well as captained, traditional sailing vessels. He also co-authored Chesapeake Bay Schooners and has written several articles and presented numerous lectures on ship preservation. In 1995 he led the research and construction of the freedom schooner Amistad at Mystic Seaport, and for the last decade he has served as Director of the Henry B. duPont Preservation Shipyard at Mystic Seaport overseeing professionals, apprentices and volunteers working year-round to preserve, restore and maintain the museum’s more than 500 historic vessels, including the iconic Charles W. Morgan. In his spare time, Quentin enjoys maritime painting, scrimshawing, and sailing his hurricane-salvaged ketch.