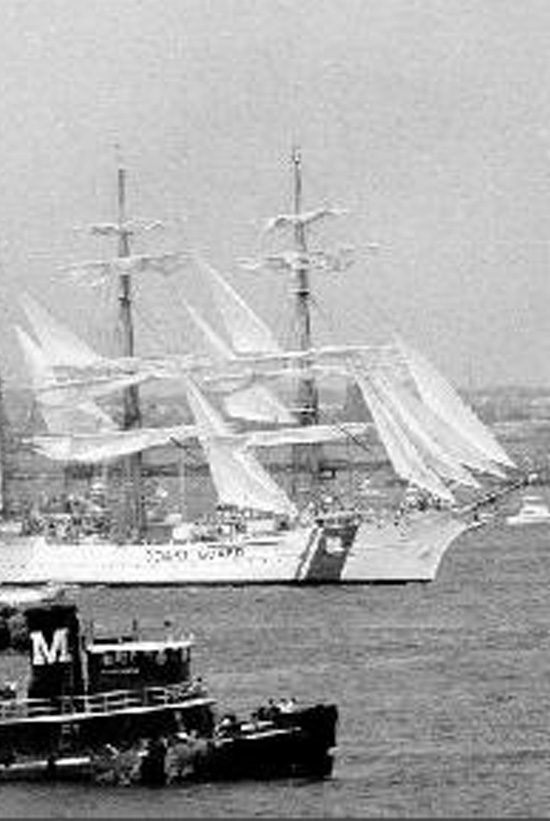 Frank Osborn Braynard (1916-2007) is well-known for achieving “Op Sail76,” the parade of tall ships and naval vessels that filled New York Harbor in celebration of our nation’s Bicentennial. Braynard and colleague Howard Slotnick traveled the globe to enlist ships from all over the world, including from the Soviet Union at the height of the Cold War. One by one, on 4 July 1976, towering ships passed below the Verrazano-Narrows Bridge, to then unfurl their sails. There were nearly 300 large ships from more than 50 countries in the 18-mile-long parade up the Hudson. Braynard and Howard Slotnick would go on to organize three more Op Sails.

Born with a love for the sea, Braynard was enthralled with the ships that sailed upon them. He received his master’s degree from Columbia in 1940 in maritime history, and during his career he was a writer of shipping news for the New York Herald Tribune, a public relations director for the American Merchant Marine Institute, and for the Moran Tugboat Company.
Braynard helped create South Street Seaport Museum, located in Lower Manhattan. He was the museum’s first program director, organizing its exhibits, festivals, and concerts. He also served as curator of the museum at the United States Merchant Marine Academy at Kings Point, to which he donated much of his maritime memorabilia.

Braynard wrote over forty books on maritime subjects that were rich in detail that brought the vessels to life. An excellent sketch artist, he supplemented his writings with skilled renderings, providing a sense of the size and look of the hundreds of ships. His best-known work is a six-volume history of his beloved liner Leviathan, seized from Germany in World War I. With Bill Miller, Mr. Braynard also wrote a three-volume history called Fifty Famous Liners.