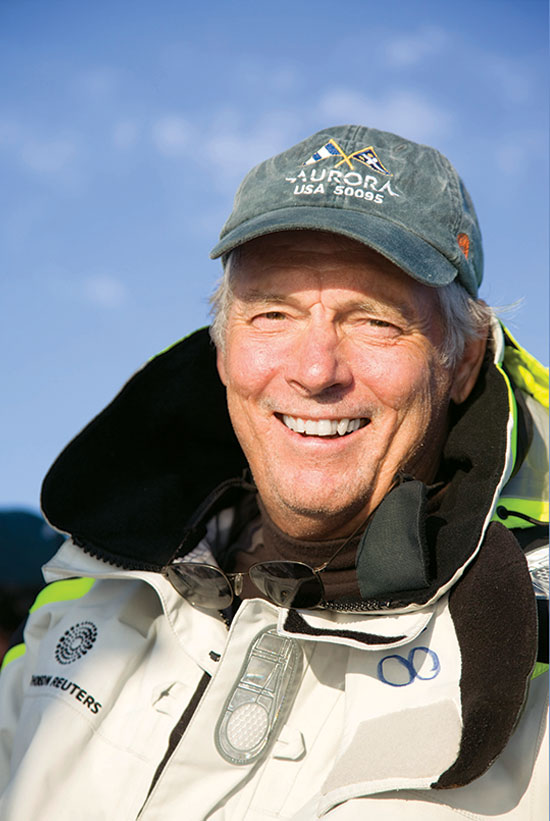 In 2006, Gary Jobson was awarded with the NMHS Distinguished Service Award.  We recognized his many accomplishments in the evening’s awards dinner journal:

Gary Jobson is a world-class sailor, television commentator and author based in Annapolis, Maryland., who is dedicated to promoting sailing. He has won many championships in one design classes, the America’s Cup with Ted Turner in 1977, the infamous Fastnet Race and many of the world’s ocean races. Jobson has authored 15 sailing books and is Editor at Large of Sailing World and Cruising World magazines. He produced sailing events for the 2008 Olympic Games and serves on the Olympic Sailing Committee. Gary Jobson covered the 2003 America’s Cup in Auckland, New Zealand, for ESPN and Sailing World. In 2004 he covered the Sailing Olympics for NBC in Athens. In college he was an All American sailor three times and was twice named College Sailor of the Year (1972, 1973).

In October 2003 Gary Jobson was inducted into the America’s Cup Hall of Fame by the Herreshoff Marine Museum. In 1999 Jobson won the Nathanael G. Herreshoff Trophy, US Sailing’s most prestigious award. This trophy is awarded annually to an individual who has made an outstanding contribution to the sport of sailing in the United States. He is the National Regatta Chairman of the Leukemia & Lymphoma Society’s sailing program.

Mr. Jobson has been ESPN’s sailing commentator since 1985. He won an A.C.E. (Award for Cable Excellence) for the 1987 America’s Cup. In 1988 Jobson won an Emmy for his production of sailing at the Olympic Games in South Korea and won an Emmy for the 2006 Volvo Ocean Race on PBS. His newest books are titled Championship Sailing and A Cats—A Century of Tradition. He has produced numerous documentaries about sailing and yacht racing. An active cruising sailor, he has led ambitious expeditions to the Arctic, Antarctica and Cape Horn.

Jobson also serves on the board of The National Sailing Hall of Fame and Sailing Center, whose goals are to celebrate American sailing’s unsung heroes and heritage and teach, through sailing’s techniques and achievements, the values of character and teamwork to a youthful audience, enhance math and science education, and preserve American sailing’s treasured artifacts and legacy.

The new interpretive center is due to open in Annapolis, MD. Through its imaginative exhibits and activities, it will take visitors deeply into sailing’s history, techniques, and spirit. It will encourage stewardship of the environment and provide role models for outstanding achievement. It will be a place where all of sailing’s best and brightest will be honored under one roof—and inspire a new generation.

Over the past thirty-five years Mr. Jobson has given over 2,000 lectures throughout the world. He started his career as a sailing coach at the US Merchant Marine Academy and the US Naval Academy.

Jobson and his wife Janice live in Annapolis, Maryland, and have three daughters, Kristi, Ashleigh, and Brooke. Mr. Johnson summed up his philosophy as: “Sailing is a sport for everyone and can be enjoyed for a lifetime. My mission in life is to encourage people to do it at whatever level they want.”