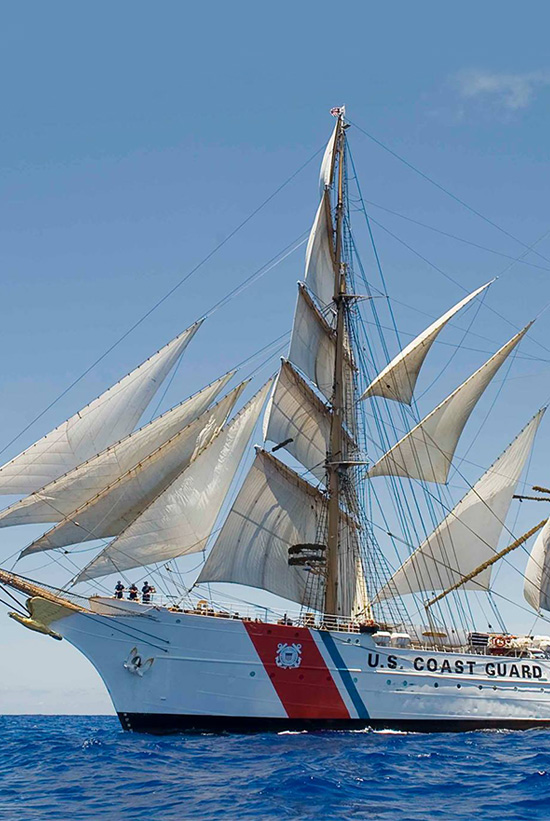 On 28 April 1978, construction workers in San Francisco’s financial district discovered the remains of the fabled ship Niantic. Abandoned in the Gold Rush in the city’s harbor, Niantic had been grounded ashore and used as a storehouse, until a fire destroyed most of the structure. The bottom of the ship and some of its contents that had been buried in the mud remained, as a hotel was constructed over it. The hotel was eventually replaced by a brick building, and then another. Between the initial devastating fire and reports of workers removing bits of the ship with each new excavation and construction, it was believed that there was nothing left of the Gold Rush’s most famous ship. J. Patrick Mahoney, the developer overseeing the latest excavation, paid for the removal of an eight-food section of the Niantic, as well as various relics from the site. For this contribution to the body of knowledge of this remarkable ship, Mahoney was recognized with the NMHS Ship Trust Award.

“America’s Tall Ship” was built in 1936 in the Blohm & Voss Shipyard in Hamburg, Germany. Christened Horst Wessel, she was one of three sister ships intended as sail training ships for the German Kriegsmarine. The other two, Gorch Fock (1933) and Albert Leo Schlageter (1937, now Sagres III), are also still sailing today. Horst Wessel spent the later years of World War II at the dock; after the war, she was part of the German naval fleet seized by the US government as war reparations. In late 1945 the US Coast Guard sent Commander Gordon McGowan and a small crew to Germany to make the ship seaworthy and bring her to the United States to serve as a Coast Guard sail training ship. Despite the ship’s neglected state and postwar shortages, McGowan and a crew of both Germans and Americans rebuilt her and on 15 May 1946 she was commissioned and christened Eagle—the seventh USCG vessel to bear that name. The story of the rebuild and Commander McGowan’s challenging crossing of the Atlantic with a crew of American and German sailors was captured in McGowan’s book The Skipper and the Eagle. Today, Eagle serves as a sail training ship for cadets of the US Coast Guard Academy in New London, and as our nation’s sailing ambassador around the world.