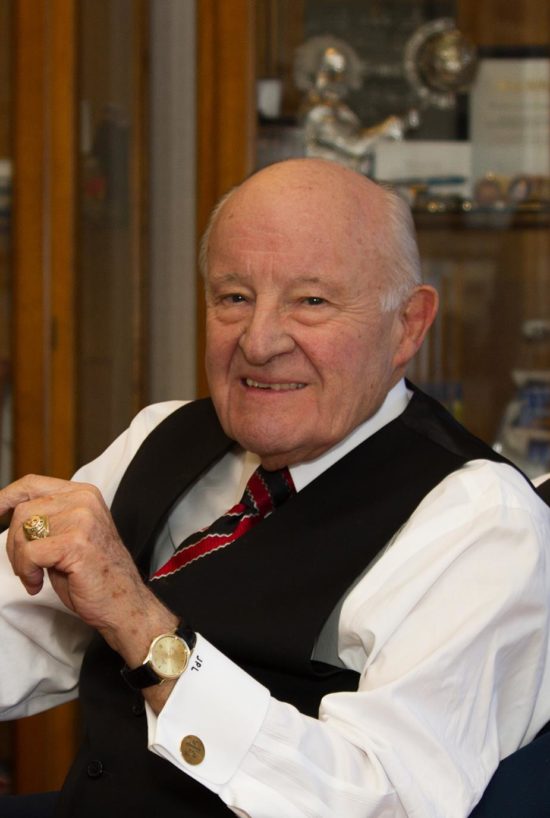 In 2017, Dr. J. Phillip London was awarded the NHF Distinguished Service Award in association with the Naval Historical Foundation at the National Maritime Awards Dinner. We recognized his many accomplishments in the evening’s awards dinner journal:

Dr. J. Phillip London is the executive chairman of the international IT and consulting services company CACI. He served 23 years as CACI’s president and chief executive officer, growing it from a small professional services consulting firm to a pacesetter in IT solutions and services across markets throughout North America and Western Europe. Dr. London transitioned to executive chairman in 2007. He oversees strategic initiatives to ensure shareholder value, advance client missions, cultivate key client relationships, and monitor major financial transactions, including CACI’s legacy mergers and acquisitions program that he began in 1992. Dr. London’s efforts also focus on the evolution and transformation of defense, intelligence, information technology, and network communications.

Graduating from the United States Naval Academy in 1959, Dr. London earned a Master’s degree in operations research from the Naval Postgraduate School in 1967 and a PhD in business administration from George Washington University in 1971. He served in the US Navy from 1959 to 1971, initially serving as a naval aviator and carrier pilot, serving with US Navy “hunter-killer” task forces arrayed against the Soviet Union’s strategic nuclear submarine threat. He was with the airborne recovery team for Col. John Glenn’s Mercury Program space flight in Friendship 7 in the Caribbean. He served as aide and administrative assistant to the Vice Chief of the Naval Material Command, Department of the Navy, from 1969 to 1970, and left active duty in 1971 to join the US Navy Reserve. He retired as a captain in 1983, having served as commanding officer of aeronautical engineering units with the Naval Air Systems Command, Washington, DC.

Dr. London has been recognized with the US Navy League’s Fleet Admiral Chester W. Nimitz Award, the Naval Order of the US Admiral of the Navy George Dewey Award, the Reserve Officers Association’s Nathan Hale Award, the US Navy League’s Leadership in Technology Award, and the Semper Fidelis Award from the US Marine Corps Scholarship Foundation, and he was inducted into the Naval Postgraduate School Hall of Fame in 2011. Dr. London serves on the board of directors of the US Navy Memorial Foundation, the Naval Historical Foundation, Friends of the National WWII Memorial, the Senior Advisory Board of the Northern Virginia Technology Council, and CAUSE (Comfort for America’s Uniformed Services). He has served as a director of the US Naval Institute and as a director and member of the Executive Committee of the Armed Forces Communications and Electronics Association. He is a member of the National Military Intelligence Association, the Intelligence and National Security Alliance, the Navy League, the US Naval Institute, the Naval Order of the USA, the American Legion, the Association of the US Army, and the Veterans of Foreign Wars. The Naval Historical Foundation will present its Distinguished Service Award to Dr. London for his naval service and lifetime support and strong advocacy of our naval heritage.

On 31 August 2020, Dr. London provided the following update: The importance of our naval heritage will always be of great passion of mine. Since receiving the 2017 NHF Distinguished Service Award, I continue to proudly serve on the boards of organizations promoting our maritime services and history. As CACI International Inc.’s Chairman, our company supports the Navy and Marine Corps’ critical missions. As a member of the USNA class of 1959, I am dedicated to the training of the next generation of naval leaders against the challenges they will face going forward. Our naval history is a heritage of American security and freedom. It is our duty to support our maritime past, present, and future.

https://www.caci.com/
Back to Award Recipients
Become a Member