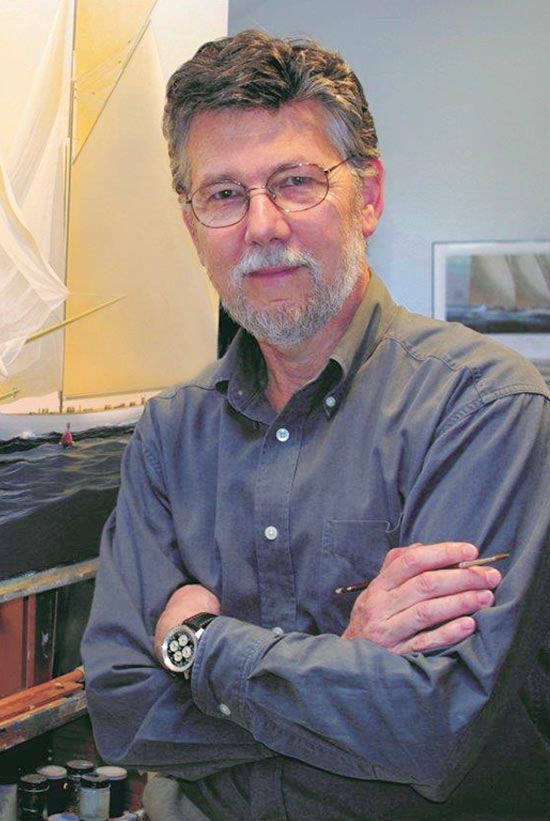 In 2007, John Mecray was awarded the NMHS Distinguished Service Award.  We recognized his many accomplishments in the evening’s awards dinner journal:

John Mecray is receiving the NMHS Distinguished Service Award in recognition of his considerable influence as America’s preeminent artist of yachts and yachting to preserve our maritime heritage by working to restore the historic schooner Coronet. Mecray is a co-founder of the International Yacht Restoration School where he serves as Vice Chairman.

Mecray, who studied illustration and painting at the Philadelphia College of Art (now the University of the Arts), enjoyed a successful career as an illustrator; he found his true calling in 1972 when he accepted an invitation to crew on a 40-foot sailboat bound for St. Thomas in the Virgin Islands. By his second trip he was painting marine scenes with a growing passion.

In 1975 a stroke of destiny led Mecray to purchase a painting by James E. Buttersworth which proved inspirational. It led him to meet the author of the definitive book on Buttersworth, Rudolph J. Schaefer. After seeing Mecray’s work, Schaefer became a friend and advisor, introducing the artist to Kennedy Galleries in New York and instilling the idea that with dedication and focus marine art could be a successful full-time career.

In 1976, after a third passage to the Virgin Islands, Mecray moved his family to Newport, Rhode Island, to devote himself to marine painting. By chance, their June 25th arrival in Newport coincided with the arrival of the Tall Ships ‘76 participants—an auspicious beginning.

The following year, Newport hosted the 23rd defense of the America’s Cup. It proved to be a Courageous summer, with Gary Jobson and Ted Turner buying paintings and establishing long-term friendships. Mecray also published his first yachting print, the J-Class Sloop Rainbow, which was featured in Yachting Magazine. Close-in deck views would become a trademark for the artist.

Nine offshore yacht deliveries between New England, Bermuda, the Caribbean and countless yacht races have given Mecray a personal knowledge of the effects of wind, sea and light on a variety of sailing vessels. Those experiences imbue his paintings with a sense of reality appreciated by sailors and non sailors alike. John Mecray’s images evoke an era that produced sailing vessels which are almost beyond comprehension today. His work has helped engender a greater appreciation for the magnificent racing yachts that are his trademark.

By 1979 Mecray’s keen interest in yachts and yachting history led to the founding of The Museum of Yachting, and their annual Classic Yacht Regatta. When the museum was offered the J-Class sloop Shamrock V, he encouraged the hesitant board of directors to accept the offer. The America’s Cup challenger became an awesome fixture on Narragansett Bay.

In 1993 he helped found the International Yacht Restoration School, where he is a trustee. The success of IYRS enabled the school to acquire Shamrock V from the museum in 1995. In 1998 it was sold to provide seed money for a project Mecray had been aiming for since 1981: the restoration of the 1885, 135 ft. schooner Coronet—America’s most historic yacht. The restoration is under way at IYRS, headed by noted yacht restorer Dr. Robert McNeil (Cangarda) and his lead shipwright Jeff Rutherford, involving IYRS graduate students in the process. Coronet will regain her full Gilded Age splendor and be fully seaworthy with only sails for power, for future generations to enjoy. The restoration will be open to the public at IYRS and, once Coronet is restored, the historic schooner will be open for public tours while docked at various museums, teaching institutions and maritime centers.

Mecray is a member of Mystic Seaport Museum’s Yachting Committee, the New York Yacht Club, the National Trust for Historic Preservation and the Herreshoff Marine Museum. Since 1997 Mecray has donated one of his limited edition prints to each of 45 Leukemia Cup Regattas held throughout the country. They are featured items in the regatta auctions and help to raise funds for the fight against Leukemia/Lymphoma.

John will forever be remembered for countless accomplishments, but his fanatical insistence on research, fundraising, creating, lecturing, and his unlimited support of The International Yacht Restoration School are what people will think of when referring to John Mecray. He was a persistent campaigner for the cause and gave every spare minute to overseeing the restoration of Coronet. His only regret would have been not seeing her sail again.

Upon his death IYRS dedicated the Mill building in his honor and the students at the school planted a Japanese maple, his favorite, as a constant reminder of his devotion and love. John’s motto, “Perfect is close enough.”