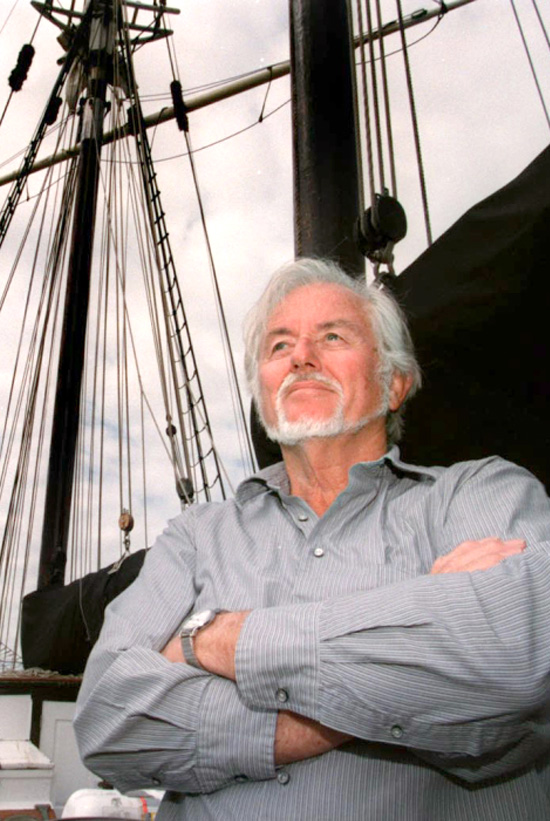 James Gladson 1930—2018, a retired Los Angeles teacher, in 1992 organized a small group of volunteers and former students to form the nonprofit, Los Angeles Maritime Institute (LAMI). The youth sail-training program at the Port of Los Angeles would offer character-building adventures at sea as an alternative to gangs. The group started with less than $5,000 and a small office at the Los Angeles Maritime Museum. Their first vessel, the 70-foot schooner, Swift of Ipswich, was purchased with the help of a loan from a local foundation. In October 1992 they began sailing and under Gladson’s motto, “school is where the kids are” the Topsail program grew.

In 1997 the success of the program and local demand for 260 additional sailing days required that a second tall ship, a 95-foot schooner, Bill of Rights, be obtained. LAMI then built and launched the twin 110-foot brigantines, Exy Johnson and Irving Johnson, in 2002 under Jim’s leadership. The brigantines are named in honor of the late Captain Irving and Electa “Exy” Johnson, character-building sail training pioneers and seven-time circumnavigators with youth crew aboard their sailing vessel Yankee.

Gladson’s love of sailing began long before the founding of LAMI: In 1963 he led an expedition to the Galapagos Islands for the Los Angeles Geographical Society on board the brigantine Yankee. In 1973 he discovered how sailing could have a positive effect on students while on a trip on his ketch, Dubloon. He began taking students and volunteers on two-boat excursions for week-long trips. In 2010, Gladson received Tall Ships America’s highest honor, the lifetime achievement award for “A Lifetime of Dedication to Sail Training.” Gladson died in 2018 at age 87, and the program he founded continues to provide young sailors with empowering challenges that help them develop into healthy, productive adults.

Since the Los Angeles Maritime Institute was founded, more than 60,000 young people have had the opportunity to benefit from participation in hands-on learning experiences through the TopSail Youth Program. LAMI continues to give “real life” context to subjects like science, mathematics, engineering, history, and literature, and to raise awareness about environmental impacts to our oceans and local waters.