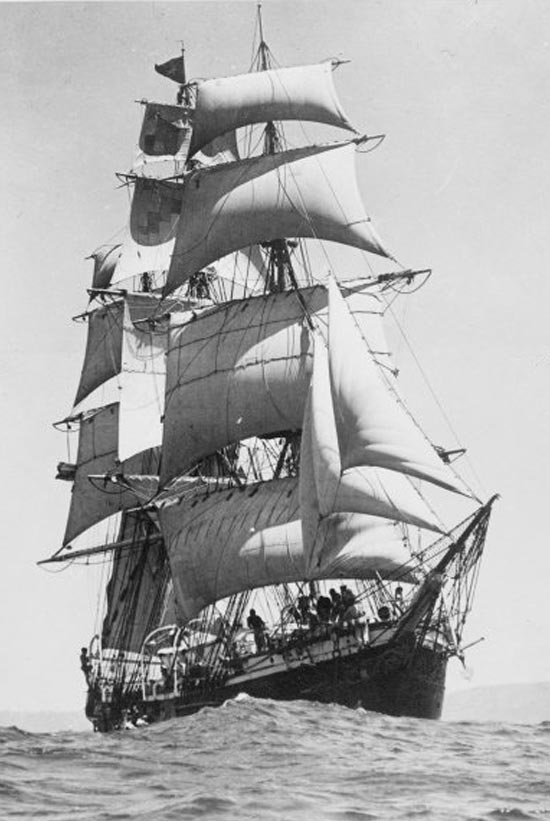 Nancie Wills was born in Launceston, Tasmania, and grew up in Melbourne, Australia. She worked in an architect’s office and then moved to the UK and took a position as an assistant editor for a London publisher. She joined the Women’s Auxiliary Air Force in 1940, and resumed acquaintance with mariner/author/photographer Alan Villiers, whom she had meet previously in Melbourne. They married in Scotland in 1940, and had three children: Kit, Katherine and Peter. The couple settled in Oxford. Nancie was active in environmental and architectural preservation, particularly related to her beloved home. She was dedicated member of the Oxford Preservation Trust, serving as secretary and then trustee, and she founded the Summertown Riverside Group to defend the environs of the nearby River Cherwell.

The full-rigged ship Joseph Conrad was built in 1882 in Copenhagen under the name Georg Stage, after the son of shipowner Frederik Stage. She served as a training vessel, preparing boys for the Danish merchant service. She sank when struck by a British freighter; 22 young men died in the incident. The ship was raised, and continued to serve as a training vessel until 1934, when she was sold to Captain Alan Villiers. Villiers renamed her Joseph Conrad and registered her under the British flag. With a crew of young men he took the Conrad on a 58,000-mile voyage lasting two years. In 1936, the Conrad was sold again, to George Huntington Hartford, who sailed her as a private yacht, including a race against the Seven Seas on a course from the US to Bermuda in back; each vessel won one leg of the competition. She was sold again in 1939 to the US Maritime Commission as a sail training vessel, and in 1947 her ownership was transferred to Mystic Seaport Museum, where she is serves as exhibit and training ship for the Mystic Mariner Program and other educational activities.