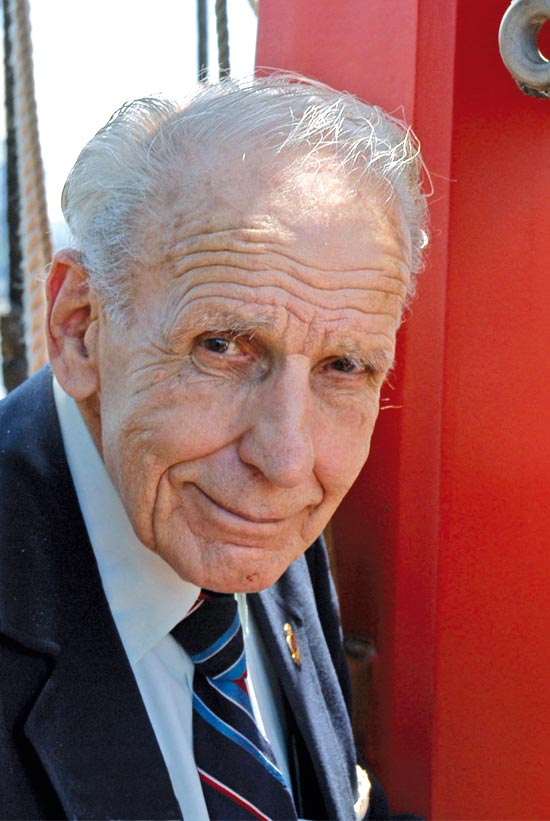 Oswald Brett (1921–2017) was born in Cheltenham, New South Wales. He spent much time sketching ships in Sydney Harbor and imagining the day when he could go to sea. He also drew inspiration for painting from his mother Estelle Brett (née Mutton), a talented amateur portrait and landscape artist. Os, as he was affectionately called by his friends, knew at an early age that he would be a professional artist concentrating entirely on ships and the sea. As a teenager, Brett was greatly inspired by the work of masterful Sydney marine artist John Allcot (1888–1973), who became his mentor and lifelong friend. Brett’s great interest in marine painting and determination to become a professional artist were already firmly established.

His dream to go to sea became a reality just before the outbreak of World War II, serving on coastal steamers around Australia. He spent the war years aboard the RMS Queen Elizabeth mostly between New York and the Firth of Clyde in Scotland. Many opportunities arose for Brett to sketch on-board scenes while off duty. The book Queen Elizabeth at War by Chris Konings (1985, Patrick Stephens) showcases his fine drawing skills and observation of detail.

Renowned marine artist John Stobart wrote of Brett’s firsthand knowledge of ships and the sea: “The result is that Brett has developed a wonderful facility for accurately portraying sea states and in placing his ships in those seas with such realism that they always look as if they’re ready to sail right off the canvas. Oswald Brett is one of the finest marine artists of the 20th century. His historic ship portraits are always meticulously researched and technically accurate to the nth degree, but they also capture another quality that speaks of the painter’s long and often arduous experience at sea.”

On the deck of the 1885 Wavertree at South Street Seaport, Captain Brian McAllister, chairman of McAllister Towing and NMHS Overseer, reminisced that he had first seen a Brett painting of the Wavertree in the old Whitehall Club. Recognizing his talent, he would commission many paintings from the artist over the years and the two men became friends. McAllister, a lifelong New York tugboat captain in charge of a fifth-generation towing company, the two men had much to talk about.

Through his long friendship with NMHS long-time president Peter Stanford, Brett became a great friend to the National Maritime Historical Society. He attended many events over the years and was very generous with his art to further the cause of preserving our maritime heritage. His prints grace the walls at NMHS headquarters, reminding of the strength and meaning in our seafaring heritage and of those who have dedicated their lives to preserving it. He was an extraordinary artist who touched the soul and immediately made a deep connection with the viewer of his artwork. He conveyed the narrative within his paintings and elicited an emotion that will be appreciated by generations to come.