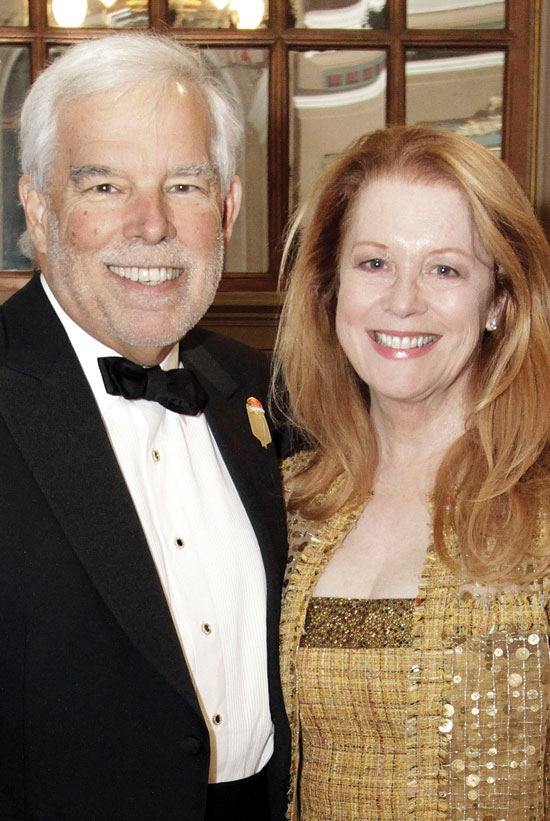 In 2019, Pam Rorke Levy and Matt Brooks were awarded with the NMHS Distinguished Service Award.  We recognized their many accomplishments in the evening’s awards dinner journal:

Husband-and-wife team Matt Brooks and Pam Rorke Levy will receive the 2019 NMHS Distinguished Service Award for their restoration of the historic yacht Dorade, the famous ocean-racing sailboat designed by Olin Stephens, regarded as one of the greatest yachts ever produced by Sparkman & Stephens.

Purchasing Dorade in 2010, Brooks and Levy restored the historic yacht to not just a seaworthy condition, but racing condition, before kicking off the “Return to Blue Water” campaign. Built in 1930 at the Minneford Yacht Yard in City Island, New York, Dorade claimed victories that decade in the Newport-Bermuda, Fastnet, Transatlantic, and Transpac races. As part of her 21st-century campaign, Dorade has repeated each of these races in the last seven years, reaching the podium in every race, and winning the Transpac overall—77 years after her first victory there. In 2015, the campaign wrapped up by placing second in class in a 2,800-mile Transatlantic Race, followed by second in class in the Rolex Fastnet Race, where Dorade finished 7th overall out of 356 boats. In the 2017 Sydney Hobart Race, she finished second in class and was the oldest boat to ever complete the race.

“The moment we walked on Dorade… we fell in love, not knowing what we were getting into,” said Levy. “After a first sail aboard Dorade, we realized this was not a boat we were going to be sailing around San Francisco Bay by ourselves; it was a racecar, basically, designed to go in a straight line for a very long way.” Rather than cosmetically restoring Dorade to sit on the dock, they wanted to restore her to do what she was meant to do and race on the open ocean. That meant going back to the drawing board and getting together with naval architects to restore the boat to race her again. “We wanted to show that a boat of that age could be restored to match or better her early performance of the 1930s, that a boat of that age could be competitive.”

“Because of the events we enter, we are sailing against modern boats… Sailing an old boat is just fine with me; I like to make things more challenging.” Said Brooks, “To win you have to have a good boat, a good crew, and luck: If you don’t have a good team, you are not going to do well in any race. We are fortunate enough to have put together a good team that not only sails well together but enjoys each other’s company and wants to continue sailing year after year.”

In addition to restoring Dorade, Levy and Brooks are also being recognized for their efforts to restore the Feadship Serena, a beautiful 74-foot mini super yacht designed by Carlo Riva and built in 1964 in the Netherlands by the De Vries Brothers, the fourth boat of the Caravelle series. Serena now serves as the support vessel to the Dorade team.

Brooks and Levy support the St. Francis Sailing Foundation based at the St. Francis Yacht Club in San Francisco, California. The foundation supports young sailors at all levels of the sport, from kids who have never been out on the water to Olympic hopefuls who are among the best young sailors in the US. Alumni include stars of US Olympics sailing and international competitions such as Paul Cayard, John Kostecki, Caleb Paine, Paige Railey, Daniela Moroz, Johnny Heineken and Erica Heineken. “It is important to both of us to make a positive social impact, and important to encourage youth to come into the sport,” said Brooks. In addition, every year a youth joins the crew of Dorade for the season.

Matt Brooks learned to sail in Monterey Bay as a boy and went on to race on San Francisco Bay on his first yacht, Quarter Pounder. He is a well-known mountain guide, has attained several first ascents in the Sierra and the French Alps, and established a mountaineering equipment company. At age 13 he soloed as a pilot and has gone on to set many world records in the air. He is the Chair and President of the New York Yacht Club Foundation and a Commissioner for San Francisco’s Asian Art Museum, and a member of the Board of Pilot Commissioners for the Bays of San Francisco, San Pablo, and Suisun.

Pam Rorke Levy is an Emmy-winning television producer and creative director and now serves as board chair of the San Francisco Art Institute. Levy has written, produced, and directed a wide range of films and TV programs, many on subjects at the intersection of art, culture, and history. She has produced documentary series and projects for PBS, National Geographic, the Discovery Channel, A&E, and the History Channel. An avid sailor and lover of classic wooden boats, Levy appreciates that these vessels are an art form in their own right.

“Absolutely, Olin Stephens is my role model,” shared Levy, “We were extraordinarily lucky to fall in love with his very first boat, the only boat he ever owned; he lived to be 100 years old and designed eight America’s Cup winners… Dorade meant a tremendous amount to him and it launched his career. There isn’t a time when I am on the boat when I don’t think about Olin being on the boat. He was able to commit himself to being excellent in every way and disciplined in every way and he did it with an extraordinary sense of humility and gratefulness. He was far and away the most successful yacht designer of the 20th century, yet humble. No matter how many races we win I want to have that kind of humility—that there is something more to learn and be generous in sharing the credit and the experience with as many other people as we can.”