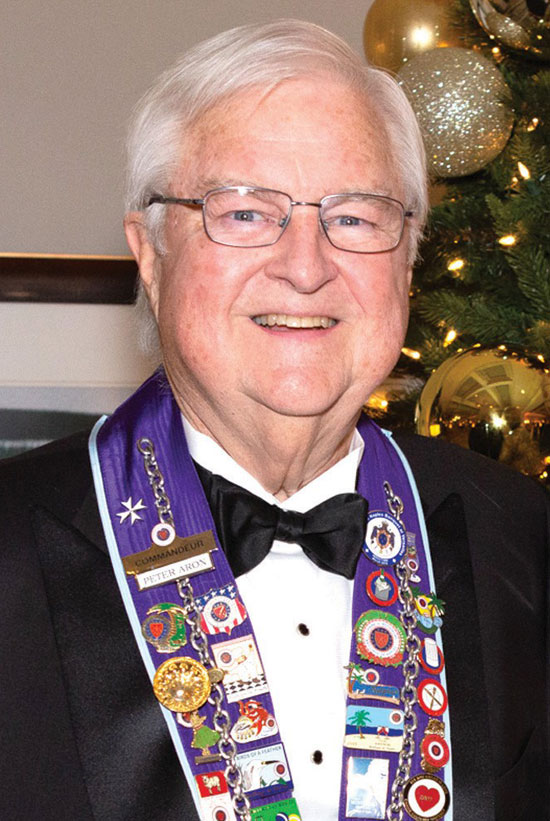 In 2008, Peter A. Aron was awarded with the David A. O’Neil Sheet Anchor Award at the Annual Awards Dinner. We recognized his many accomplishments in the evening’s awards dinner journal:

Peter A. Aron has enjoyed a life-long interest in maritime history and has supported or become directly involved with a wide variety of maritime history and preservation projects. He is quick to credit his interest and a good deal of his knowledge about history and the sea to his late father, Jack R. Aron. Peter and Jack were recipients of the NMHS’ Ship Trust Award in 1990 for their work saving the Peking.

For the past several years, Peter has been a strong supporter of Sea History magazine. “It is the best written, the most honestly researched, and just plain attractive of all the publications about history and the sea. Each issue gives everyone who loves ships and things-nautical a great ‘fix,”‘ he said. Mr. Aron is a leader in promoting the written voice of the heritage, the magazines and books that record the seafaring story.

Peter Aron’s major involvement with maritime history was his service for nearly thirty years as a trustee of the South Street Seaport Museum, serving the last thirteen years as its chairman. He and his family signed on at the very beginning, when Peter Stanford and Jakob Isbrandtsen made the rounds of all the maritime-related companies in lower Manhattan seeking help for the then-new waterfront museum. The Arons, then major importers of coffee, cocoa and sugar, along with the Aron Charitable Foundation, Inc., soon became supporters of South Street Seaport Museum. They were among the early “Plankowners” for Wavertree when she was found by Karl Kortum in Buenos Aires and towed to New York for restoration. For the next 30-plus years numerous projects were undertaken aboard Wavertree, to stabilize and preserve the vessel and then restore her—the most important being the replacement of the ship’s main deck beams and planking in the mid-1980’s, for which NMHS was the lead donor. Meanwhile, Peter and his father were instrumental in saving the barque Peking from the ship-breakers in England in 1974.

Over the years Peter Aron and his family have helped with the preservation of a number of NMHS—supported vessels, including Ernestina, Matilda, and Lettie G. Howard. He served for a time—during the Frank Braynard era—on the Advisory Council of the museum at the United States Merchant Marine Academy, which is only about a mile down the road from his home in Kings Point, NY. At present he is a trustee of the Woods Hole Oceanographic Institution and a chairman emeritus of South Street Seaport Museum.