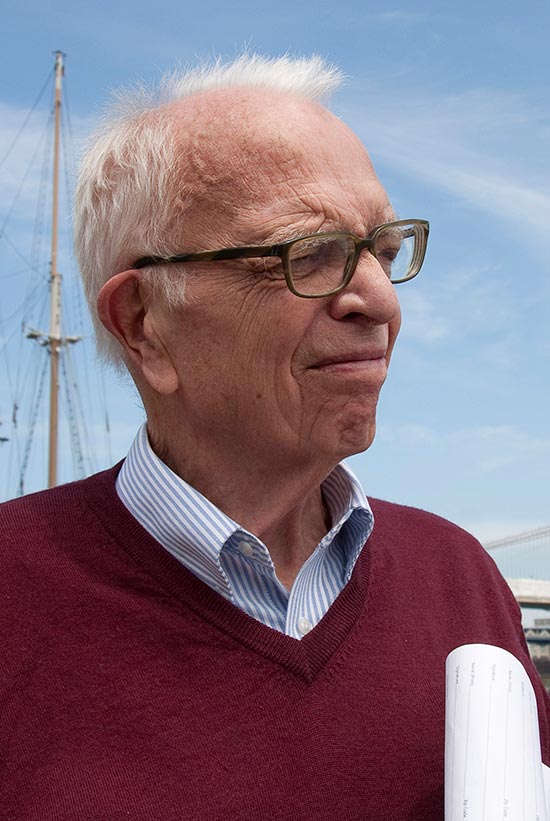 Peter Stanford was a Navy veteran of the Second World War; even then, David Hooper, a fellow serviceman, remembered that Peter was “ship mad, always mad for ships.” Peter went on to Harvard for an undergraduate degree and to King’s College, Cambridge—choosing to make the journey across the pond as a mate in the gaff cutter Iolaire—for a master’s degree. He worked in publishing and market research, before turning to advertising, starting out at McCann-Erickson in the mail room and working his way to the position of copy supervisor. Inspired by San Francisco’s Hyde Street Pier, Peter and his wife, Norma, set out to create a museum with its own fleet of historic ships, retaining the historic buildings to capture the flavor of the working waterfront. With like-minded enthusiasts they founded Friends of the South Street Seaport Museum, and the museum opened its doors in 1967, with Peter at the helm and Norma serving as vice president; their schooner, Athena, was its honorary sailing ambassador. They brought the former square-rigger Wavertree from Argentina to become the museum’s flagship. Peter and Norma would later tell the story of this remarkable journey in their 2013 book, A Dream of Tall Ships.

Peter and Norma also became involved with the National Maritime Historical Society, originally founded to bring the Sewall-built square-rigger Kaiulani, languishing in the Philippines, to the waterfront of our nation’s capital as a tangible tie to our nation’s maritime past. When it became clear that even the remarkable fundraising efforts of the group were not going to be sufficient to restore the ship in its deteriorated shape, the group adopted a broader mission of preserving historic ships and our collective maritime heritage, Peter Stanford was elected its new president. He was to lead the organization for over three decades. In addition to his leadership role at NMHS, Peter was also editor of Sea History magazine and a frequent contributing author; his 22-part series that for six years captivated readers with tales bound up in the saga of the first watercraft, sailing ships, exploration, commerce, and conquest.

By 1976 Peter and Norma had left South Street Seaport Museum to devote their full attention to NMHS. The organization co-sponsored the Millennial Maritime Conference in 2000, and the triennial Maritime Heritage Conferences, and brought tall ships up the Hudson for the bicentennial of Rockland County, New York. Under the imprint of Sea History Press, it brought the classics The Skipper and the Eagle by Gordon McGowan and Irving Johnson’s Peking Battles Cape Horn to a new generation of readers, and published Norman Brouwer’s International Register of Historic Ships. Over the years Peter had a part in bringing many vessels to a new mission, including the barque Elissa, the Liberty Ship John W Brown, the tug Mathilda, the tug Eppleton Hall, and the schooner Ernestina-Morrissey.

Other endeavors benefitting from Peter’s efforts include the Save Our Seaport committee, working to restore the South Street Seaport Museum’s financial underpinnings after a series of setbacks, and the Working Watercraft Committee, later renamed the Working H arbor Committee, of which he was founding chair. He was recognized with an honorary doctorate of letters by the SUNY Maritime College, and received the India House’s James A. Kelly Award, the USS Constitution Museum’s Don Turner Award, and the Distinguished Service Award For the Harbor of New York-New Jersey from the Working Harbor Committee; he was honored by the National Park Service Foundation, the Municipal Art Society, the Parks Council, the American Merchant Marine Museum and the Port Promotion Association. NMHS presented him with its own D avid A. O ‘Neil Sheet Anchor Award for his decades of leadership and untiring dedication to the cause.