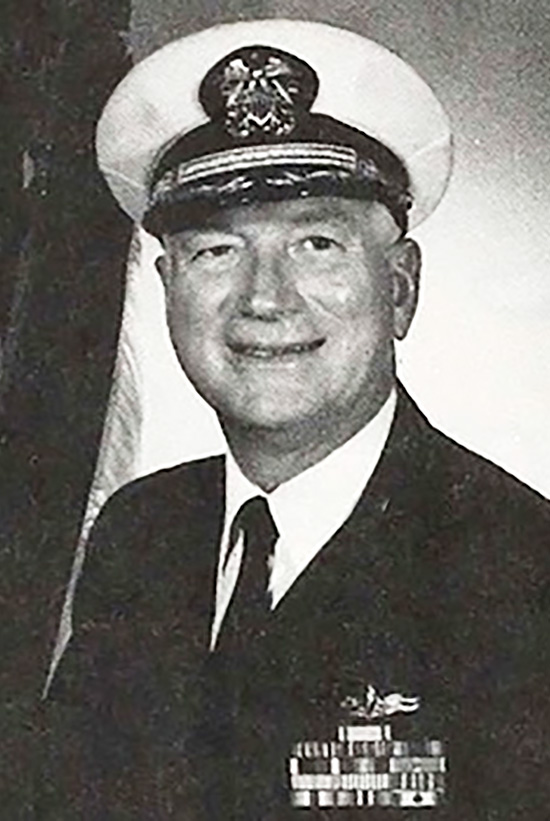 RADM Thomas J. Patterson, USMS (Ret.) 1924—2008 had a long career as a seagoing officer, a senior official of the US Maritime Administration, and as deputy superintendent of the US Merchant Marine Academy. However, it was the Jeremiah O’Brien, an old grey cargo ship launched in 1943 and a veteran of the 1944 D-Day invasion, that was the love of his life.

Born in Philadelphia, Adm. Patterson was a graduate of the US Merchant Marine Academy. He held a commission both as a naval officer and as a merchant marine officer, and he sailed as a mate on tankers and then as a Navy officer aboard the Guardian, a World War II Liberty ship that had been converted to a radar picket ship in the Atlantic. After Navy service, Adm. Patterson worked for the Maritime Administration as the Western regional administrator in San Francisco. He was assigned with selecting Liberty ships for scrapping, discovered the Jeremiah O’Brien, and became determined to save her.

The SS Jeremiah O’Brien is one of two remaining functional Liberty ships of World War II, and one of more than 2,700 identical vessels produced. She made seven World War II voyages, ranging from England and Northern Ireland to South America, to India, to Australia. She also made eleven crossings of the English Channel carrying personnel and supplies to the Normandy beaches in support of the D-Day invasion. After the war, she was “mothballed” in the Reserve Fleet at Suisun Bay, north of San Francisco. Adm. Patterson’s maneuvering saved the O’Brien from the scrapyard. In 1979, after hundreds of hours of volunteer labor to remove thick layers of preservatives, the O’Brien was ready to be restored. No other ship ever has steamed out of the mothball fleet under her own power.

Since her restoration, the Jeremiah O’Brien returned to Europe in 1994 to participate in the 50th Anniversary of Operation Overlord, the Allied invasion at Normandy that turned the tide of World War II in Europe. Of the more than 5,000 ships that formed the original D-Day armada, the O’Brien was the only ship to return, making the entire voyage with no significant repairs and arriving at each port ahead of schedule.

The French government presented Adm. Patterson with the Legion of Honor in 2004 for his role in restoring the ship and for bringing it to France.

Today the Jeremiah O’Brien is moored at Pier 45, Fisherman’s Wharf, a premier San Francisco attraction, and a living museum on the National Register of Historic Places and a National Historic Landmark.