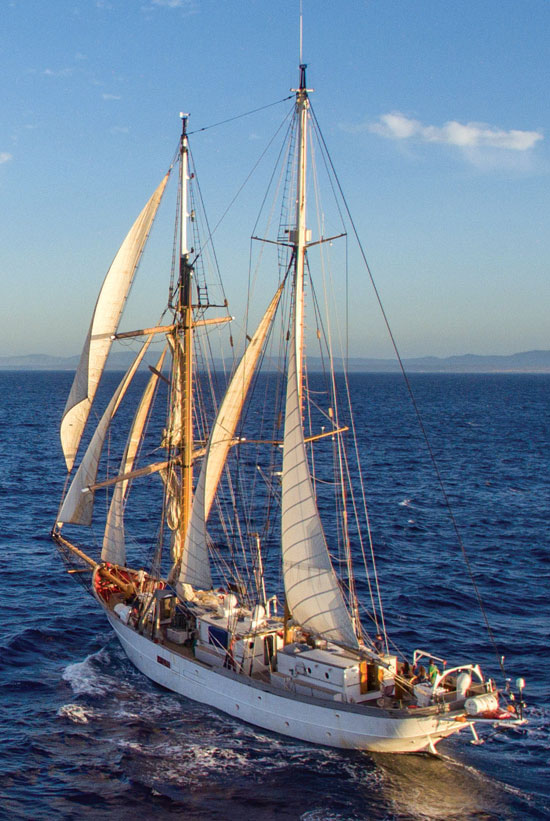 In 1996, the Sea Education Association (SEA) was awarded with the Walter Cronkite Award for Excellence in Maritime Education.  We recognized its many accomplishments in the evening’s awards dinner journal:

Sea Education Association (SEA) is recognized with the NMHS Walter Cronkite Award for Excellence in Maritime Education. For more than four decades and over one million nautical miles sailed, SEA has educated students about the world’s oceans through its fully accredited study abroad program, SEA Semester, an environmental studies program focused on the oceans. SEA Semester creates scholars, stewards and leaders who are prepared to address the defining issue of the twenty-first century: the human impact on the environment. SEA looks for motivated students of all majors who are passionate about learning, and willing to seek out new challenges. Students study the ocean from a multitude of academic perspectives, often aboard one of its two traditional sailing ships, SSV Corwith Cramer, operating in the Atlantic Ocean, and SSV Robert C Seamans, operating in the Pacific.

SEA was founded in 1971 by a small group led by Corwith “Cory” Cramer, Jr. and Edward “Sandy” MacArthur. Cory was a leader, both in the world of the classroom and in the world of sailing, and a passionate advocate of learning by doing. His idea was to create a program to provide an opportunity to study the ocean from a multitude of academic perspectives, and to do it from the platform of a traditional sailing vessel. Such a program would bring attention to a vast and largely unexplored realm of inquiry—the young field of ocean science—while offering each student the chance to live and work in the marine environment. Cramer believed this opportunity should be open to students of the sciences, humanities, and social sciences. The oceans would, he thought, provide the ideal context in which to introduce the would-be scientist to the fascinating artistic, literary, philosophical, and political elements of our maritime heritage. They would also offer an unparalleled opportunity for non-scientists to develop the observational and investigative skills that grow from sustained attention to complex physical data.

The earliest SEA Semesters were directed from headquarters in Chicago and Boston. In 1975, Cory brought the organization and its sailing vessel, the RV Westward, to Woods Hole, Massachusetts, a world-renowned center of oceanographic teaching and research. Today, SEA is a partner in the scientific work of that community and a recognized international leader in education under sail.

The SEA Semester program has expanded dramatically over the years. In 1987, with the building of a second ship, the Corwith Cramer was launched, and with it an entirely new classification of research sailing vessel. RV Westward was sold to Ocean Classroom Foundation and replaced by the SSV Robert C. Seamans, a state-of-the-art vessel, launched in 2001, that made it possible for SEA to offer SEA Semesters in both the Atlantic and Pacific oceans. With a continuing tradition of innovation and constant improvement, SEA developed the Stanford@SEA Program and formed additional partnerships with domestic and foreign universities.

While the academic focus varies, each SEA Program offers an interconnected suite of courses designed to explore a specific ocean-related theme using a cross-disciplinary approach. Coursework includes maritime policy, history and literature, ship navigation, and oceanography. SEA is dedicated to helping its students grow in their respect for and understanding of themselves and others, as well as our planet.