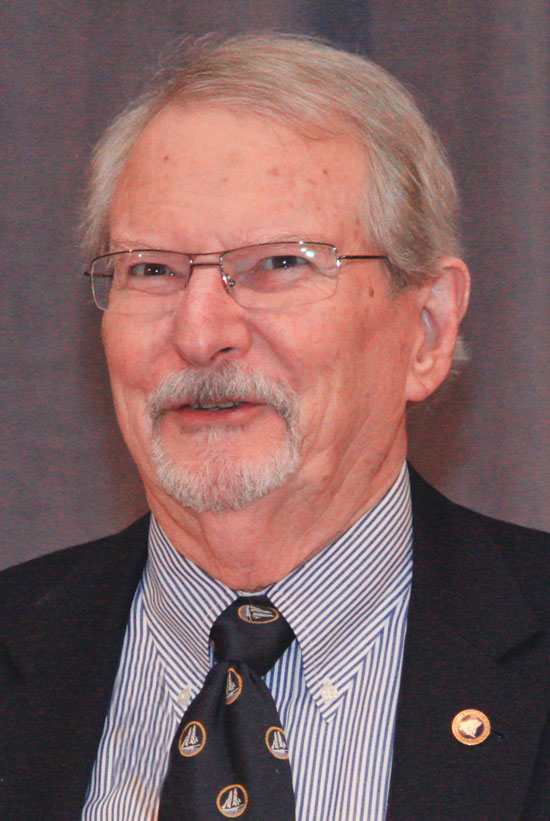 In 2015, Ronald L. Oswald was awarded with the David A. O’Neil Sheet Anchor Award at the Annual Awards Awards Dinner. We recognized his many accomplishments in the evening’s awards dinner journal:

The David A. O’Neil Sheet Anchor Award will be presented to NMHS Chairman Ronald L. Oswald. A retired computer systems project manager, Ron began his career working on computer simulation software for the Saturn/Apollo lunar landing project with Bell Telephone Laboratories. He later worked in various marketing and technical support management roles for a major computer manufacturer. An honors graduate of Saint Peter’s University in Jersey City, New Jersey, with a BS in physics, he also holds an MS in applied mathematics from Stevens Institute of Technology.

Ron’s lifelong interest in maritime history and art led him to the National Maritime Historical Society and its Saturday seminar program, which not only helped fuel that interest, but also introduced him to a dedicated group of individuals with similar interests. He was strongly influenced and inspired by Peter Stanford, who was NMHS president at the time, with his wealth of knowledge and enthusiasm for the preservation of our maritime heritage. Ron’s increasing involvement in NMHS activities eventually led to his 2001 election to the board of trustees. When Ron’s name was suggested for the Board, Dave O’Neil spoke up passionately about Ron’s work, interest and broad knowledge of maritime history. It is most fitting that someone Dave supported as a candidate for the board of trustees is now being recognized with the award created in Dave’s honor. Ron subsequently served as program chairman and was elected treasurer in 2004. In 2007, he was elected chairman of the board of trustees. Of his career with NMHS, Ron has said: “You start volunteering to help out, slowly get drawn in, and before you know it, you’re chairman.”

As chairman, to enhance the Society’s efforts with young people, he initiated NMHS’s participation in National History Day, a voluntary program that involves middle school and high school students in researching and presenting a topic that illustrates the theme for that school year. Students compete at the state level for prizes, medals, and the opportunity to compete at the national finals; over 600,000 students participate in this program each year. NMHS offers prizes for projects with a maritime theme at a steadily increasing number of state contests, thus reaching an ever-growing number of students, teachers, and judges around the country.

Ronald Oswald has represented the Society internationally and constantly travels and attends functions on the Society’s behalf. As chairman of NMHS, he has served on the executive board of the Council of American Maritime Museums (CAMM) and the dinner committee that organizes the annual New York Pickle Night, and has spearheaded the project to put a headstone on the unmarked grave of clipper ship designer John Griffiths.  In addition, Ron was the marine history consultant for the NMHS calendars for many years. Russell Jinishian, of the J. Russell Jinishian Gallery, would chose 12 maritime paintings and write about the artist. Ron would then research the background of the paintings and provide the copy.

Ron Oswald is an avid reader and passionate student of maritime history. He would often edit feature articles for NMHS publications for historic accuracy. He does admit to having an unyielding collection of books, one that has spilled out of the shelves of his library and dominates his home. To that, he has added an impressive collection of maritime paintings and prints.