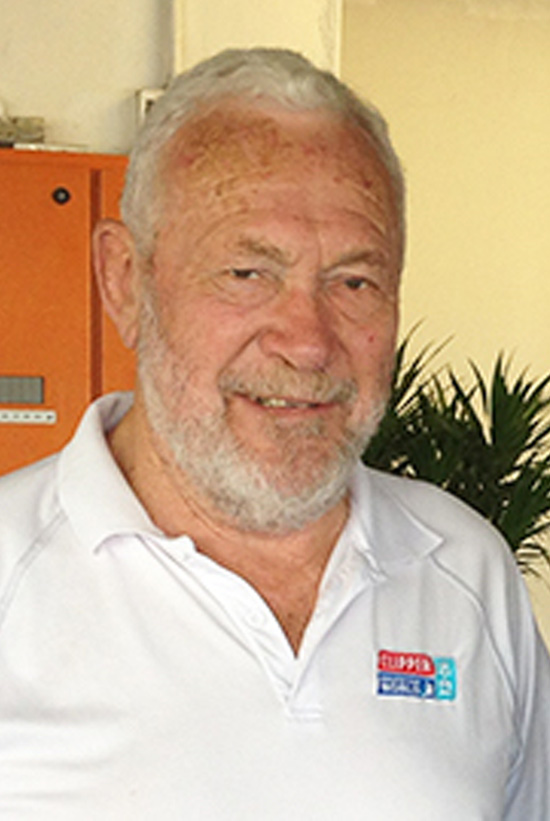 In 2008, Sir Robin Knox-Johnston, CBE was awarded the NMHS Distinguished Service Award.  We recognized his many accomplishments in the evening’s awards dinner journal:

On 22 April 1969, aboard his 32-foot home-built wooden boat Suhaili, Sir Robin Knox-Johnston, after 312 days at sea, became the first man ever to circumnavigate the globe non-stop and single-handed. He was the only person of the nine contestants to finish that grueling Sunday Times Golden Globe Race, and donated his prize money to the family of the contestant who perished in the attempt.

He has been described as Britain’s greatest-ever yachtsman. 25 years later, in 1994, he and Kiwi yachting legend Sir Peter Blake won the Jules Verne Trophy for the fastest circumnavigation. Their time was 74 days, 22 hours, 18 minutes and 22 seconds. This was the team’s second attempt at this prize after their first one failed in 1992, when their 90-foot catamaran, Enza, was damaged.

Born 17 March 1939 in Putney in London, Knox-Johnston grew up on England’s Wirral Peninsula. He served in the Merchant Navy and the Royal Navy from 1957 to 1965. Sir Robin has devoted considerable time and energy to both education and charitable work. In 1992 he was invited to become president of the Sail Training Association, where he served until 2001. During his tenure, Knox-Johnston oversaw the collection of funds to replace the STA’s vessels Sir Winston Churchill and Malcolm Miller with the new, larger brigs Prince William and Stavros S. Niarchos.

In October 2006, at the age of 67, Sir Robin embarked on another solo race around the world. He was the oldest competitor in the Velux 5 Oceans Race, challenging the very best sailors in the extreme high-performance Open 60 class. Among the many perils were storms in the Bay of Biscay and the big wind and waves of the Roaring 40’s in the Southern Ocean. After months of intensity and hardship, on 4 May 2007, Knox-Johnston successfully completed his second solo circumnavigation in his yacht SAGA Insurance, finishing the race almost 200 days faster than in 1969.

Knox-Johnston has been recognized with multiple awards, fellowships and honorary degrees. In 1969 Knox-Johnston was awarded the CBE (Commander of the Order of the British Empire) and he was knighted in 1995.

Knox-Johnston has also had a successful business career. In 1995 he created, and still chairs, Clipper Ventures, a prominent sports marketing outfit dedicated to running and promoting world-class marine events. In 1996 Sir Robin established the first Clipper Round the World Yacht Race and has since worked with the Clipper Ventures company as chairman to progress the race to higher levels every year.

Sir Robin Knox-Johnston has a lengthy bibliography, promoting yachting through his many popular books, particularly A World of My Own, History of Yachting, and Cape Horn. A new book, Force of Nature (Penguin Books, 2008) is Sir Robin’s firsthand account of his extraordinary return to the ultra-competitive, punishing world of single-handed offshore racing. The book recounts his harrowing second solo circumnavigation of the world aboard the yacht SAGA Insurance.