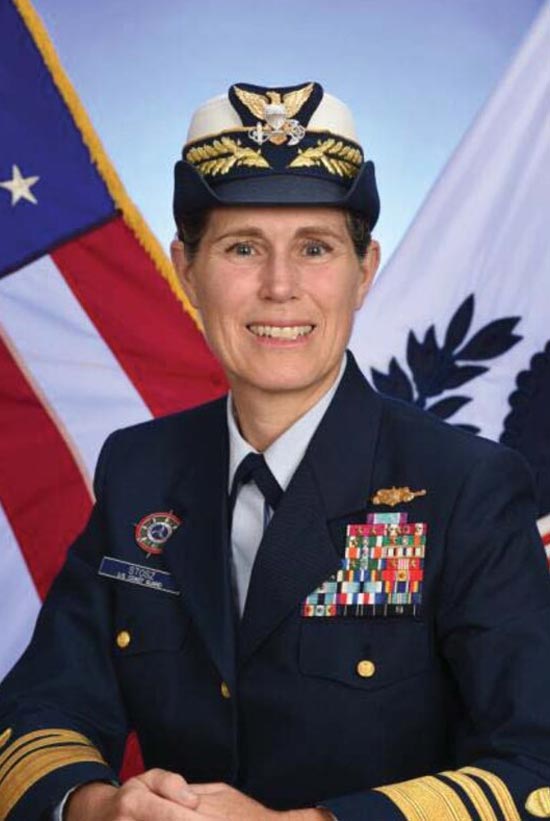 In 2013, VADM Sandra L. Stosz, USCG (Ret.) was awarded with the NMHS Distinguished Service Award.  We recognized her many accomplishments in the evening’s awards dinner journal:

A graduate of the class of 1982 of the US Coast Guard Academy with a BS degree in government, Rear Admiral Sandra L. Stosz, USCG, earned an MBA from Northwestern University’s J. L. Kellogg Graduate School of Management in 1994 and a Master of National Security Strategy from the National War College in 2004. She is a surface operations officer with twelve years at sea, including the command of two cutters, USCGC Katmai Bay, an icebreaker operating out of Sault Ste. Marie, Michigan, and USCGC Reliance, out of Kittery Bay, Maine. She has participated in drug and alien migrant interdiction, fisheries enforcement, search and rescue, polar and domestic icebreaking, and ports and waterways security.

When not on sea duty, Rear Admiral Stosz specialized in personnel and resource management and program review, serving tours of duty as Chief of Officer Assignments and as Program Reviewer and Acquisition Funds Coordinator for Coast Guard major systems acquisitions. Her personal awards include three Legion of Merit medals, four Meritorious Service medals, two Coast Guard Commendation medals and two Coast Guard Achievement medal s. She has served as Commanding Officer of the Coast Guard’s recruit training center in Cape May, New Jersey, and as Director of Coast Guard Enterprise Strategic Management and Doctrine. Her most recent position before becoming Superintendent of the academy was the Director of Reserve and Leadership at Coast Guard Headquarters in Washington, DC. There, she was responsible for developing policies to recruit, train and support approximately 8,100 Coast Guard Reservists.

As a member of only the third class of cadets at the Coast Guard Academy to admit women, Sandra Stosz was on a path which would lead to many firsts. She was the Department of Transportation’s first female military aide, assigned to secretary Samuel Skinner. She was the first woman to serve on a law-enforcement vessel, and in 1990 she was the first woman to command a cutter on the Great Lakes. In 2010, she became the first woman superintendent of a United States service academy, returning to her alma mater to lead the corps of approximately 1,000 Coast Guard cadets.

Sandra Stosz credits the Coast Guard for a climate of inclusion; she is making it a priority to continue to develop that environment of diversity and opportunity, in part by expanding outreach, developing awareness of the Coast Guard, its operations and the possibilities offered by a Coast Guard career. In one such program, the academy has partnered with four historically black colleges and universities to sponsor engineering students to work with high school students as part of their Academy Introduction Missions. Those students go on to broaden community awareness of the opportunities offered by the Coast Guard Academy. Recruitment is only part of the process; Superintendent Stosz also emphasizes student retention, starting with a prep school program for students before they enter the academy, and carefully monitoring and tracking student progress in key academic areas, to identify and intervene when students need academic help. Rear Admiral Stosz is being recognized not only for the distinction of being the first woman to lead an American service academy, but also honored for her role in training the next generation for the sea, sharing our mission of educating America’s youth about maritime careers.