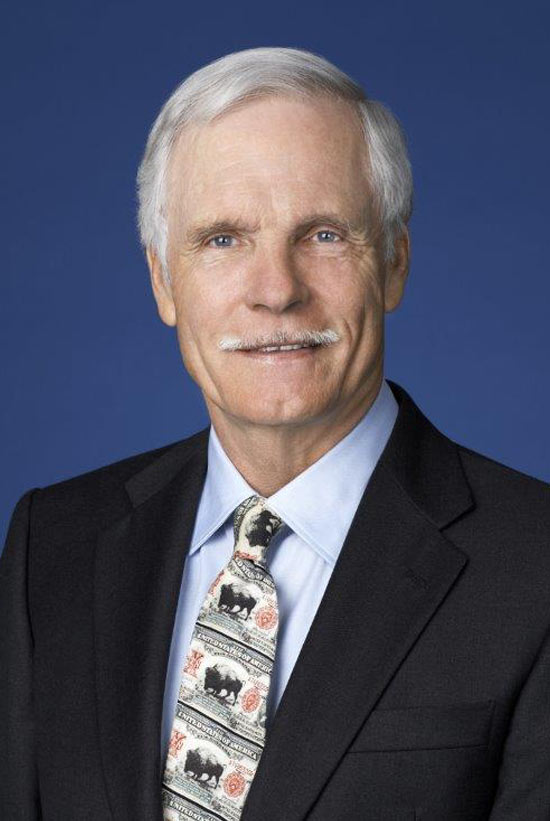 In 2009, Ted Turner was awarded with the NMHS Distinguished Service Award at the Annual Awards Dinner. We recognized his many accomplishments in the evening’s awards dinner journal:

In presenting the NMHS Distinguished Service Award to Mr. Turner, the Society honors Turner’s dedication, vision, and influence as a proponent of America’s maritime heritage, and his multiple accomplishments as a world-renowned yachtsman. NMHS Overseer Gary Jobson, tactician onboard for the win of the 1977 America’s Cup, and America’s yachting spokesman, will be on hand to present the award.

The National Maritime Historical Society salutes Ted Turner for his commitment to yachting. He entered his first sailing competition at age 11 at the Savannah Yacht Club and competed in Olympic trials in 1964. He won the coveted “Yachtsman of the Year” award four times during his sailing career and, in all, has won approximately 500 sailing trophies. In 1977 he successfully skippered the 12-meter Courageous defending the America’s Cup for the United States. Turner was inducted into the America’s Cup Hall of Fame in 1993.

Turner skippered Tenacious in the infamous 1979 Fastnet race, of which he was proclaimed the winner in a corrected-time victory. Storms during the race wreaked havoc on over 300 yachts taking part in the biennial race, resulting in 15 fatalities. The emergency response was the largest rescue operation in peacetime and included naval ships, lifeboats, commercial boats, and helicopters.

Throughout his career, Turner has received recognition for his entrepreneurial acumen, sharp business skills, leadership qualities, and his exceptional philanthropy. Turner has stepped into the international spotlight with one accomplishment after another. Whether in sailing, cable television, billboard advertisement, sports team ownership, environmental initiatives or philanthropy—Turner’s vision, determination, generosity and forthrightness have consistently garnered well-deserved international recognition.

In September 1997 Turner pledged $1 billion to the good-works program of the United Nations, creating the United Nations Foundation to administer the gift, where he currently serves as its chairman. Turner is also chairman of the Turner Foundation, which supports efforts for improving air and water quality, developing a sustainable energy future to protect our climate, safeguarding environmental health, maintaining wildlife habitat protection, and developing practices and policies to curb population growth rates. He is co-chairman of the Nuclear Threat Initiative, which works to reduce the growing threat from nuclear, chemical and biological weapons; and chairman of Turner Enterprises, Inc., a private company, which manages his business interests, land holdings and investments, including the oversight of two mi Ilion acres in 12 states and in Argentina, with more than 50,000 head of bison.

Ted Turner is the only sailor to be named US Sailing’s Yachtsman of the Year four times. His accomplishments on the water include skippering Courageous to victory in the 1977 America’s Cup, wining many of the world’s great ocean races including the Sydney to Hobart Race and the infamous 1979 Fastnet Race, which is considered to be the roughest ocean race on record.

Turner served on the Board of Directors of Yachting magazine, and was President of the Offshore Ocean Racing Club in the 1970’s during a period of time when handicap rating rules were in a state of fluctuation. Turner has been a generous supporter of many sailing organizations over the years including US Sailing, the Leukemia Cup Regatta Series, Intercollegiate Racing and numerous other sailing projects.

https://www.tedturner.com
Back to Award Recipients
Become a Member