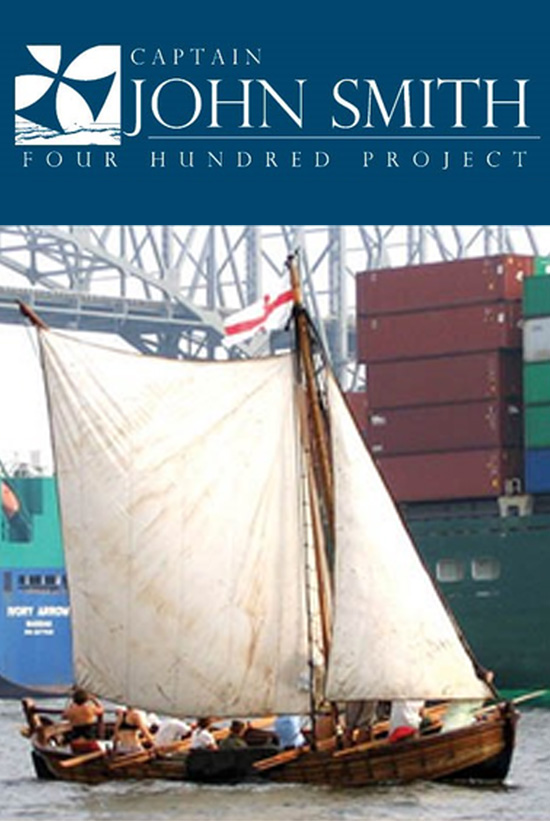 In 2007, The Captain John Smith 400 Project was awarded with the Walter Cronkite Award for Excellence in Maritime Education.  We recognized its many accomplishments in the evening’s awards dinner journal:

Begun in May of this year, the project recreated Captain Smith’s 1608 circumnavigation of the Chesapeake Bay with a crew of 12 sailing for 121 days on a replica of Smith’s shallop. This project has initiated research, exhibitions, curriculum development, and symposia for educators, and will leave an enduring legacy with the “Captain John Smith Water Trail.”

On June 2, 1608, one year after the founding of Jamestown, Captain John Smith and 14 English settlers set out in a small open boat on one of the most important voyages of exploration in American history. Alone in a foreign land, Smith’s expedition spent over three months exploring the Chesapeake in a quest for precious metals and a Northwest passage to the Pacific. Beset by storms, heat, and sickness, the expedition nevertheless managed to map nearly every major tributary of the great estuary while traveling over 2,500 miles. Though Smith and his men failed in their stated quest, they succeeded in recording an ecosystem teeming with fish, crabs, oysters, and waterfowl. The explorers also recorded their remarkable encounters with the diverse Algonquian-, Iroquoian-, and Siouan-speaking peoples that had inhabited the region for over 10,000 years. Smith’s expedition ultimately opened the Chesapeake to thousands of European settlers, altering forever the face of the Bay and profoundly changing the lives of those living around it.

On May 12, 2007, a crew of 12 modern explorers boarded a replica of Smith’s “shallop,” built at the Sultana Shipyard in Chestertown, Maryland and constructed using period materials and techniques. Propelling themselves by oar and sail alone, the crew of the 2007 voyage followed Smith’s route to every corner of the Chesapeake, introducing millions of people to this important episode in America’s history while blazing the path for America’s first National Historic Water Trail.

This ambitious re-enactment was undertaken by Sultana Projects, a non-profit organization based in Chestertown, Maryland, in partnership with the Friends of the Captain John Smith Chesapeake National Historic Trail, a group of organizations that includes the Chesapeake Bay Foundation, The Conservation Fund, and the National Geographic Society.

During the reenactment voyage, the replica shallop and her crew made 23 scheduled stops in Maryland, Virginia, Delaware, and Washington, DC, giving the public an opportunity to see the shallop, visit with the crew, and view a variety of educational exhibits related to Smith’s voyages and the world of the early l 7rh century Chesapeake.

The National Oceanic and Atmospheric Administration develop “smart buoys” to guide adventurers as they voyage on the new Captain John Smith Chesapeake National Historic Trail. These interactive buoys will serve as guide posts, scientific observation platforms, and state-of-the art educational tools. Accessible through the Internet and mobile devices, such as cell phones, the buoys will provide important cultural, geographic, and historical information, as well as collect and deliver real-time scientific data.