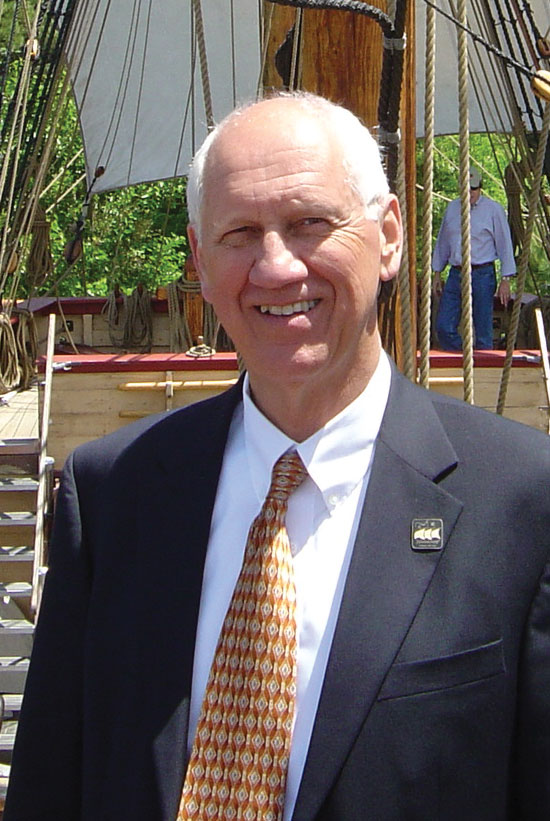 In 2018, Dr. Timothy J. Runyan was awarded with the David A. O’Neil Sheet Anchor Award at the Annual Awards Dinner. We recognized his many accomplishments in the evening’s awards dinner journal:

Dr. Timothy J. Runyan is recognized with the NMHS David A. O’Neil Sheet Anchor Award for his work as an educator and leading advocate for our nation’s maritime heritage community. Dr. Runyan is also recognized for his invaluable efforts to help build the strength and outreach of the Society in his role as trustee and chair of the Sea History Editorial Advisory Board. He recently served as the co-chair of the 2017 and 2018 National Maritime Awards Dinners, promoting advocacy for maritime heritage funding in our nation’s capital.

Dr. Runyan is one of the most active proponents working today to build advocacy for federal maritime heritage causes. He serves as chair of the National Maritime Alliance, which represents a diverse maritime constituency and a broad range of institutions, including maritime museums, historic ships, lighthouses, canals, boat yards, boatbuilding and sailing schools, historic preservation groups, marine unions and businesses, and individuals. These organizations and persons all celebrate variations of a common tradition. Together they are the custodians of a maritime heritage that is as diverse as America itself. Under his leadership the Alliance successfully lobbied Congress and won the fight to gain continued funding for the National Maritime Heritage Act grants program with the passage of the National Defense Authorization Act in 2017.

Dr. Runyan is also a founder and trustee emeritus of the Great Lakes Science Center in Cleveland, Ohio, where he led the effort to preserve the 1925-built, 618-foot SS William G. Mather as a museum ship on the Cleveland lakefront. He is also the past president of the Great Lakes Historical Society that operates the National Museum of the Great Lakes in Toledo, Ohio. From 2007–2010, Dr. Runyan served as acting manager of the Maritime Heritage Program, Office of National Marine Sanctuaries, US National Oceanic and Atmospheric Administration (N OM)—the largest maritime heritage program in the federal government.

He has served in many roles furthering the cause of maritime heritage preservation in the United States, including founding and organizing the Maritime Heritage Conferences, which bring together the maritime community to exchange information, ideas, and experience.

As director of the Maritime Studies Program at East Carolina University, a graduate program in both maritime history and underwater archaeology, Dr. Runyan joined his students in the formal scientific diver training certification program and participated in the program’s archaeological field work. Runyan has participated in several underwater archaeology projects and served as a principal investigator in the 2004 survey and identification of the Russian-American Company barque Kad’yak, which sank in 1860 off Kodiak, Alaska. It is the oldest shipwreck found in Alaska, and the only Russian-American Company ship ever discovered.

Dr. Runyan has served in many roles furthering the cause of maritime heritage preservation in the United States, but none more influential than his role as an educator. He has been a professor at Cleveland State University, Oberlin College, and East Carolina University. He has mentored countless college and graduate students through their academic programs, and later in their professional careers.

His many publications include books, articles and research reports; he served as editor of the scholarly journal American Neptune, published at the Peabody Essex Museum.