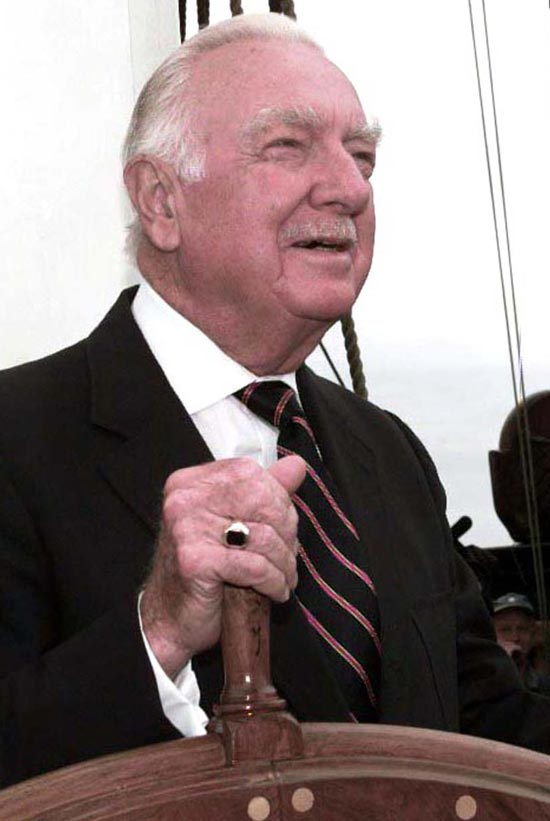 History’s the most exciting story we can know. It’s our own story, after all, and bringing that story to life for people is our job. We in this society must do more to meet that challenge. – Walter Cronkite

Walter Leland Cronkite Jr., broadcast journalist and American icon, loved sailing and the lessons of the sea and used his fame and good name to help NMHS gain new members, strength, and funding so that Sea History and its stories would have ever greater reach and importance. As a National Maritime Historical Society Overseer, he signed on as chairman of the NMHS Education Initiative and helped brainstorm ideas for the future of our organization. Recipients of the NMHS Walter Cronkite Award for Excellence in Maritime Education benefit from the prestige and recognition his name confers. We are greatly honored that this American treasure and icon became a significant leader in the National Maritime Historical Society.

Cronkite reported many historical events from 1937 to 1981, including bombings in World War II; the Nuremberg trials; combat in the Vietnam War; the Dawson’s Field hijackings; Watergate; the Iran Hostage Crisis; and the assassinations of President John F. Kennedy, civil rights pioneer Martin Luther King Jr., and Beatles musician John Lennon. He was also known for his extensive coverage of the U.S. space program, from Project Mercury to the Moon landings to the Space Shuttle. He was the only non-NASA recipient of an Ambassador of Exploration award.

Cronkite, born in St. Joseph, Missouri, began writing news for his high school paper, worked as an intern at the Houston Post, and attended journalism school at the University of Texas while working as state capitol reporter for the Houston Press and Scripps-Howard. He dropped out of journalism school to report full time, joining United Press in 1937 and becoming a war correspondent a few years later.

Cronkite cultivated a taste for adventure and in the late 1950s, competed as an amateur race car driver with the Lotus team at Lime Rock Park in Lakeville, Conn., and for the Lancia team at Sebring, Fla. Once he became an anchorman, CBS persuaded him to give up car racing, so he took up a new sport, sailing: Cronkite was an adventurous sailor who helmed a succession of sailboats named Wyntje (pronounced WIN-tee) and named for the first woman to marry a Cronkite in the New Amsterdam colony in 1642, according to Cronkite lore. Cronkite enjoyed day-sailing offshore all along the East Coast; sailed winters in the Caribbean; and visited some exotic sailing locales, including Scandinavia, Australia, and Alaska.

Cronkite was presented with numerous awards, including the Presidential Medal of Freedom by former President Jimmy Carter in 1981. He received the S. Roger Horchow Award for Greatest Public Service by a Private Citizen, four Peabody awards for excellence in broadcasting, and the Paul White Award for lifetime achievement from the Radio Television Digital News Association. He was inducted into the Academy of Television Arts and Sciences Hall of Fame and received the Four Freedoms Award for the Freedom of Speech. He received the Ischia International Journalism Award, and the Rotary National Award for Space Achievement’s Corona Award in recognition of a lifetime of achievement in space exploration. He was elected a Fellow of the American Academy of Arts and Sciences and became the first non-astronaut to receive NASA’s Ambassador of Exploration Award.

I first met Walter Cronkite on July 3, 1976, when Operation Sail was in New York Harbor in its full glory, preparing for the Fourth of July Parade of Sail. Later, in 1989, I spent two weeks with Walter and Betsy Cronkite as guests aboard the US Coast Guard Barque Eagle, sailing from London to Leningrad. While crossing the Baltic Sea, one of the officers asked Walter if he would address the cadets. He replied that he didn’t believe these young people would know who he was anymore, since he had been retired for ten years, but he was, of course, willing. As it turned out, he ended up doing four sessions because they all wanted a chance to hear him speak. Walter Cronkite was always very human and accessible to everyone. He never considered himself a celebrity… What you saw on television was who he was in real life.
– Howard Slotnick, NMHS Chairman Emeritus and Trustee