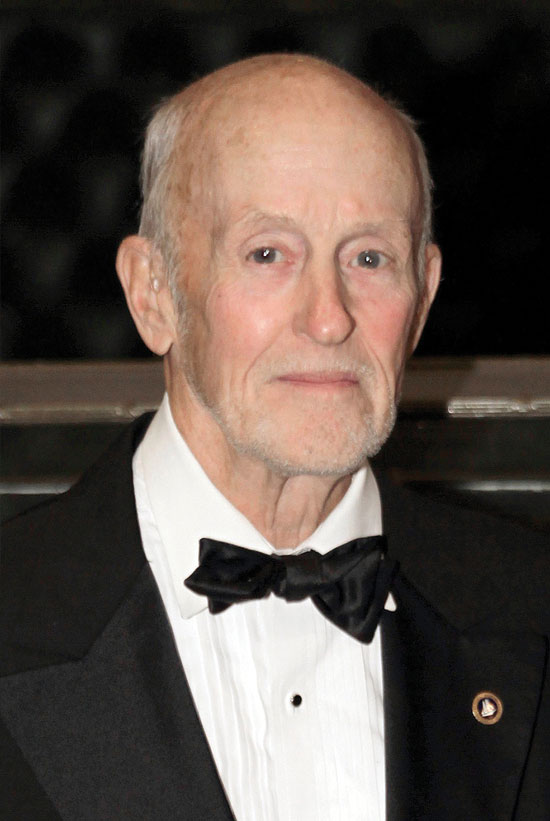 In 2011, Walter R. Brown, NMHS Chairman Emeritus, was awarded with the David A. O’Neil Sheet Anchor Award at the Annual Awards Dinner. We recognized his many accomplishments in the evening’s awards dinner journal:

Walter Brown got a taste for seafaring at 18, when he took a summer job on a tanker. That brief exposure was enough, however; after only two years at Miami University in Oxford, Ohio, he felt the call of the sea, got in his car and drove out to California, transferring to the NROTC program at USC.

Graduating with a degree in business, Mr. Brown began his commissioned service with the US Navy aboard a tanker in the Philippines, where he served two years before joining the LST Westchester County (LST-1167), serving for two years, primarily in Vietnam. When he was discharged from the navy, he bought a boat in Yokohama, intending to sail back to the United States, but was instead drawn to the area, and remained in Japan, living aboard his boat and sailing.

After that year, Mr. Brown did indeed return to the United States, took his license exam and qualified as a third mate, but the fates brought him back to Japan when he secured a job with an American company that transferred him to its Japan office. He remained there five years, until the closing of the Japan office brought him back to the US, where he signed on with Texaco’s Marine department and remained for 15 years. Upon departing Texaco, Mr. Brown bought Slocum Yachts, building ocean-going sailboats in Taiwan. After four years, he accepted an invitation to work for Valles Steamship, where he served for five years, followed by a brief stint as a yacht broker.

Walter Brown first happened upon a copy of Sea History magazine in the Greenwich library. His interest piqued, he contacted NMHS founder and then-president Peter Stanford, and the two hit it off. In his own words, Mr. Brown “started meeting other people, and got involved.” He was asked to become a Trustee in 1993, and served from 2003 to 2006 as NMHS chairman. Of NMHS, he said “the people there are just fun to be with.” He is being honored with the NMHS David A. O’Neil Sheet Anchor Award for his longtime support and leadership of the Society. Of Mr. Brown, NMHS founder and president emeritus Peter Stanford remarked that “Walter’s generous spirit and confidence in our mission sustained the National Society in hard times, and remains a shining asset for the future.” NMHS chairman Ronald L. Oswald remembers that “chairman emeritus Walter Brown was the consummate indefatigable hand at the helm as the Society recovered from the effects of the 9/11 attacks.”

Mr. Brown currently serves as president of Henry L. & Grace Doherty Charitable Foundation, and as an advisor to the Sea Education Association, Mystic Seaport, and Lamont-Doherty Earth Observatory. He maintains his connection to the water, has a USCG 100-ton master license, and enjoys kayaking whenever he finds the opportunity.