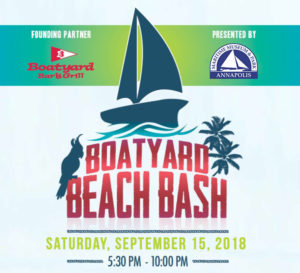 While it receives acclaim for being one of the best parties in Annapolis, the Boatyard Beach Bash is most importantly a fundraiser for the Annapolis Maritime Museum’s education programs. To date, it has raised over $854,076 for the Museum.

In addition to the concert, the ticketed event includes an extensive grilled buffet catered by founding sponsor, Boatyard Bar & Grill, and cocktails on the beach. VIP tickets include a private reception with the musicians, catered hors-d’oeuvres, and specialty drinks. The VIP reception takes place from 4-5:30 p.m.

Buy your tickets early – this event sells out each year!