Time Running Out For Falls of Clyde The 1878 iron-hulled ship Falls of Clyde is facing a deadline. The state of Hawaii, concerned about the condition of the ship and the delays in getting her into dry dock, has given the Friends of the Falls of Clyde until August to present a restoration plan, along with the backing to make it happen.

Launched on 12 December 1878, the four-masted full-rigged ship Falls of Clyde sailed for twenty years for the Falls line, carrying cargo such as lumber, jute, cement and wheat. In 1898 she was purchased by Capt. William Matson, who registered her in Hawaii, anticipating that she would be granted American registry when Hawaii became an American territory. She sailed between Hawaii and San Francisco, carrying molasses to the mainland and returning with kerosene generally making excellent time for the route; on her best crossing, she made the journey in eight days. 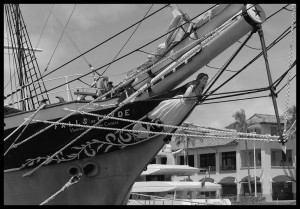 Eventually converting his fleet to steam, Matson sold the Falls in 1907, to the Associated Oil Company for $85,000. She was converted to a tanker, carrying 756,000 gallons of oil between California and Honolulu. Associated, too, finally saw the need to convert its fleet, and Falls of Clyde served as a charter vessel for a brief stint before her masts were cut down to serve as a floating gasoline depot in Ketchikan, Alaska.

In 1963 the ship’s owners planned to scuttle her for a breakwater in Vancouver, British Columbia, but the Honolulu Advertiser raised $25,000 to return the Falls to Hawaii, and the US Navy supplied the tow to Honolulu’s waterfront, where enthusiastic volunteers carried out much-needed restoration work; in 1984 she was named a National Historic Monument by the National Parks Service. Her condition began to deteriorate, however, and by 2008 Falls of Clyde, then owned by the Bishop Museum, faced an estimated $30 million in restoration costs; the Bishop Museum developed plans to sink the ship offshore. The Friends of the Falls of Clyde formed and purchased her from the Bishop museum for $1, with the goal of raising those funds and restoring the ship. The organization has established an Indiegogo campaign to raise the money to get the ship into dry dock. 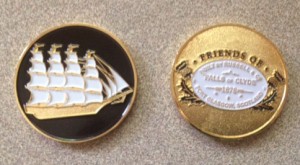