The trustees and staff of the National Maritime Historical Society mourn the loss of Charles A. Robertson—their friend, former trustee and recipient of the 2016 NMHS Distinguished Service Award.  Charles was a true friend of the maritime heritage and he will be sorely missed.

Engaged in the maritime industry since 1973, Charles pioneered the small ship luxury cruise industry in the United States with his founding of American Cruise Lines, Pearl Seas Cruises, Chesapeake Shipbuilding, and affiliated companies.  American Cruise Lines is one of the largest cruise companies in the country and the operator of the newest fleet of small cruise ships in the United States. Under Charles’ leadership, the company was recognized by the World Travel Awards as the “World’s Leading Small Ships Cruise Line” and the “World’s Leading River Cruise Company.”

Charles held a USCG Master’s License and First Class Pilot’s License for unlimited tonnage. An active commercial pilot, he regularly flew ex-military aircraft and participated in shows and demonstrations across the country. An avid racing sailor from age 11, he won many national and international events including the Newport Bermuda Race, the Queen’s Cup, and the National Championship in the Atlantic Class in many different types of racing yachts including the 73-foot Maxi Cannonball. 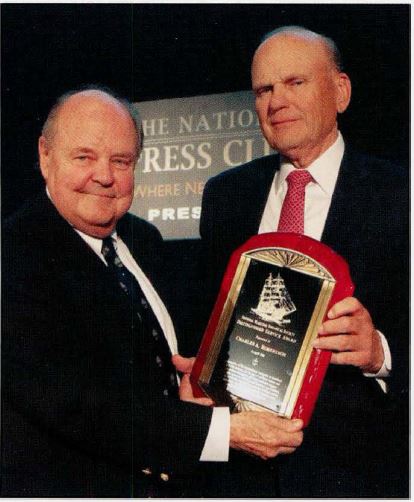 In 2016 the Society honored Charles with the NMHS Distinguished Service Award in recognition of his achievements in the maritime industry as a shipbuilder and ship owner, for contributing to our understanding of American maritime history through educational cruise programming, and for his leadership in OpSail 2000. Charles was the chairman of OpSail 2000, overseeing the largest peacetime assembling of naval and training ships to date: 120 tall ships, more than 40 warships from around the world, and 70,000 smaller pleasure craft, to mark the new millennium in the ports of San Juan, Puerto Rico; Miami; Norfolk; Philadelphia; New York; New London; and Portland.

We extend our deepest condolences to all the members of the Robertson family.