Columbia was a marvel when she was built in 1902 in the Detroit Dry Dock Company shipyard in Wyandotte, Michigan. The 216-foot propeller-driven excursion steamer was originally licensed to carry over 3,500 passengers (her official maximum capacity was later reduced to 2,500). She was designed by naval architect Frank Kirby, designer of countless famous and well-respected steamers of the day, working with artist and architect Louis O. Keil to create a vessel that left a grand impression. She was the first passenger steamer to boast a full ballroom; the 80-minute cruise to Bob-Lo Island amusement park and back offered popular music of the day. Guests of a more technical bent could inspect the 1,217-horsepower triple expansion steam engine, visible from the ship’s interior. 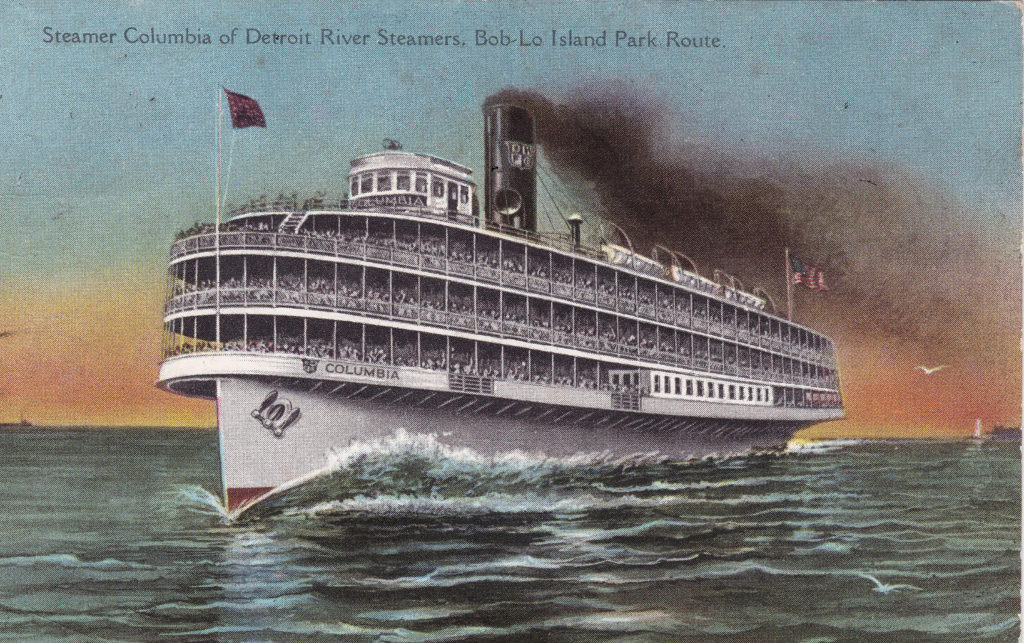 In 1910 Columbia was joined by her “little sister” ship, the Kirby-designed Ste. Claire, built in Toledo, Ohio. Together, the two “Bob-Lo boats” served the island until they were taken out of commission in 1991, with only a two-year pause in 1932–33 when the park was shuttered due to the financial pressures of the Depression.

New York art dealer Richard Anderson, whose love of historic boats was born as a volunteer at South Street Seaport Museum as a boy, created the SS Columbia Project in 2002 to bring the steamer to New York’s Hudson River which had also enjoyed a heyday of ferries and excursion boats in the early 20th century. Mr. Anderson passed away in 2013, but the SS Columbia Project is carrying out his dream, working to bring Columbia to Kingston, NY, to carry passengers on the Hudson and help people re-connect with the river and its towns, as well as to serve as a venue for the arts and educational programming.

Columbia is currently undergoing partial restoration in Buffalo, NY, and will be making the journey to Kingston for further repairs. The project was awarded a Maritime Heritage Grant of $100,000 in May of 2018 towards the restoration work.