In the Pages of Sea History 160

Collision in the Narrows: the 1917 Halifax Harbor Explosion

by Roger Marsters
The most powerful man-made explosion before the Atomic Age came with little warning on a cold December morning in Halifax, Nova Scotia, when a collision between two cargo ships in the harbor set off a catastrophic chain reaction, catching all in its radius in its devastating blast. Painting by Austin Dwyer.
Featured article of Sea History 160: read it now

“To Boldly Go…” NASA Astronauts Taking the Lessons of Sail Training into Space
by Bert Rogers, with Mark Scibinico
The link between ocean voyaging and space exploration might be closer than you think. NASA astronauts find the lessons from sail training aboard the 1877 barque Elissa valuable in their preparations for space flight. A New Look at Nathaniel Bowditch, Nineteenth-Century America’s Numbers Man
by Tamara Plakins Thornton
Mariners know his name from their well-used navigational “ bible,” The New American Practical Navigator, but Nathaniel Bowditch’s obsession with numbers and order left a legacy in other fields few would realize came from his work. Probing the Mysteries of the Jones Act: Part 2
by Michael J. Rauworth
Mike Rauworth breaks down the origins and modern-day ramifications of the Merchant Marine Act of 1920 in this second installment of a two-part series on the Jones Act.

On Watch—SS United States Engineer Bob Sturm Still Serving the “Big U”
by Bill Bleyer
More than a half a century after he signed off as a junior engineer aboard the famed ocean liner SS United States, Bob Sturm returns to serve his old ship—this time in the archives. Coast Guardsman Robert Goldman, and the Kamikaze Attack on LST-66
by William H. Thiesen
After a Japanese Zero fighter attacked their ship, a burned and badly injured pharmacist’s mate rushed across the burning deck to the aid of his wounded shipmates. Learn about the heroics of this young Coast Guardsman and his dedication and sacrifice for his shipmates, his ship, and his nation. 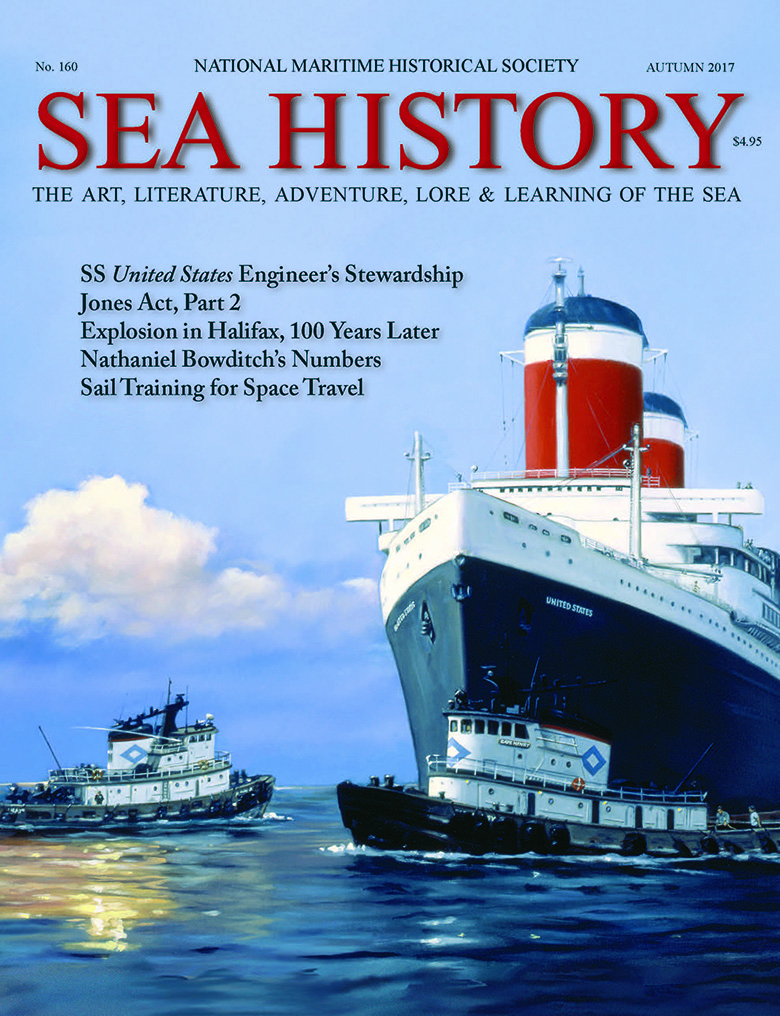 On our cover this issue: Diamond Jubilee, by Robert Semler.