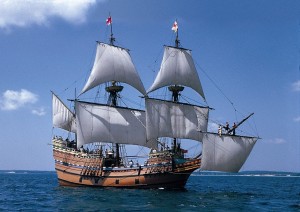 Plymouth, MA–July 14, 2014 – Massachusetts Governor Deval Patrick signed the 2015 fiscal year budget which includes $2 million in funding for the restoration of Mayflower II on Friday, July 11, 2014. The iconic ship is a centerpiece exhibit of Plimoth Plantation and one of the Commonwealth’s leading tourism attractions, drawing millions of people from around the world to learn about the Pilgrims and the United States’ early Colonial history. The significant restoration of the 57-year-old wooden ship is scheduled for completion by 2020, the 400th anniversary of the Pilgrims’ arrival.

Funding will be used to complete an extensive round of repairs and restoration including replacing several planks, frames, and knees sourced from rare white oak. Further plans are to rebuild the topside half-deck, repair the transom, poop deck, and starboard half-deck. Gangway improvements, hemp-line rigging, sail replacement, and new paint are also planned.

Mayflower II was a gift to the people of the United States from the people of England in appreciation of America’s assistance during World War II.  In a message of goodwill read at Mayflower II’s launch in September of 1956, then Governor of Massachusetts, Christian A. Herter wrote, “I am stirred by the spirit of good will that prompted your people to give so generously to a craft that will soon sail far away. Godspeed your valiant ship to our shores.  We shall take loving care of it, and treasure it always as a living monument of friendship between our nations.”

The ship set sail from Plymouth, England on April 20, 1957 with a crew of 33 men. Arriving in Plymouth, Massachusetts 55 days later, she was greeted by large crowds and celebrations including tributes by Vice President Richard Nixon and Senator John F. Kennedy. Mayflower II’s journey was chronicled by some of the era’s leading publications, including Life Magazine, National Geographic, and was prominently reported by the international news media. Since then, the ship has been a beloved fixture on Plymouth’s historic waterfront, and an anchor for the town and region’s robust tourism economy.

Plimoth Plantation hopes that the State’s funding will bring further attention to Mayflower II’s unique and important role in American history and act as a catalyst for additional support for the ship’s educational mission and continued care.  Efforts are underway to fully fund the ship’s ongoing maintenance for decades to come.  For more information on Mayflower II and Plimoth Plantation, please visit their website at www.plimoth.org.