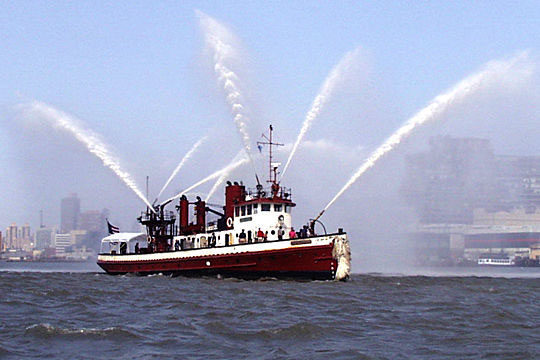 Fireboat John J. Harvey, launched in 1931, served New York City until she was retired from the FDNY in 1994. She was a historic first: the first fireboat powered by internal combustion engines and the first that could pump and maneuver simultaneously. She was the largest, fastest fire-fighting machine of her time, capable of pumping 18,000 gallons per minute.

Saved from the scrap yard by a dedicated group of volunteers, she is now moored at Pier 66 Maritime, at 26th St. and the Hudson River alongside the lightship Frying Pan. The fireboat now serves as an operational museum and education center, offering free public trips to New Yorkers and visitors.

On September 11 2001, John J. Harvey was recalled to service by the FDNY and reactivated as Marine Company 2. Alongside the FDNY fireboats Fire Fighter and John D. McKean, she pumped water for 80 hours until water mains in lower Manhattan were restored to service. Harvey’s action that week was the subject of countless news articles and a children’s book. Harvey is listed on the National Register of Historic Places.

The program’s mission is to introduce adults and children to New York’s maritime and firefighting history. With ongoing fundraising and constant maintenance, they will continue to operate John J Harvey and keep a piece of history alive. During a typical May-October season, John J. Harvey’s caretakers

In sum, as a floating, operational museum, John J. Harvey charms and educates thousands of New Yorkers and visitors each year.