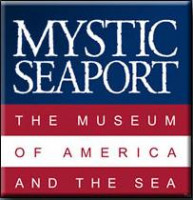 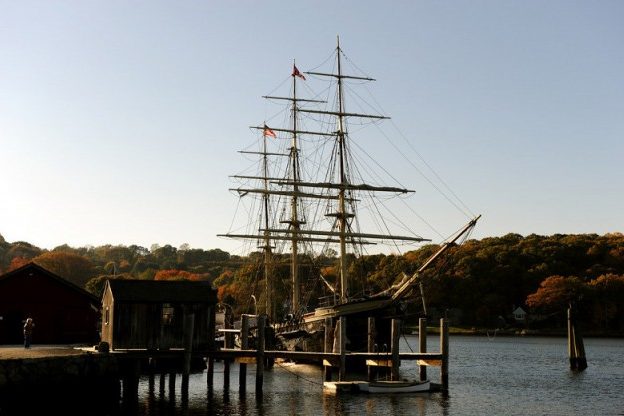 Built in Copenhagen in 1883 and named for Georg Stage as a memorial to the young son of Frederik Stage, a prominent ship owner, the vessel was designed to accommodate 80 boys in training for the Danish merchant service. Run down by a British freighter in 1905, the Georg Stage sank, but soon afterward she was raised and repaired, and resumed her career.

After fifty-two years, the vessel was about to be broken up when Alan Villiers bought her in 1934. Captain Villiers took her, sailing under the British flag and renamed the Joseph Conrad, on a voyage around the world that lasted more than two years. In 1936 George Huntington Hartford bought her, added a modern engine, and used her for three years as a private yacht. She was transferred in 1939 by Hartford to the US Maritime Commission and continued in service as an American training ship until 1945. After a two-year hiatus she became, by act of Congress, the property of Mystic Seaport.

The Joseph Conrad is the site for an overnight summer sailing camp and overnight school and youth programs during the rest of the year.

Campers sleep aboard the historic full-rigged ship, learn to sail during the day, and participate in fun activities at night, including a boat ride on the Mystic River, 19th-century “zip-lining” (breeches buoy life-saving re-enactment), a Planetarium show, climbing the rigging, and more. Lifelong friendships are made through the spirit of teamwork that underlies the Conrad experience. Our staff includes a state licensed director, experienced counselors and experienced sailing instructors, many of whom are past Conrad participants. The six-day overnight camps run July-August. School and youth groups stay aboard the Conrad as part of the museum’s Ship-to-Shore and Anchor watch programs.